In the wake of the UN’s decision to withdraw its military peacekeepers from Haiti, the Haitian government is now faced with questions about what, if any, military force should replace them to avoid a security vacuum. Haiti’s national army has been disbanded for 22 years, and, for many Haitians, the thought of reconstituting an army brings back memories of the political repression and destabilization associated with the prior military regime. Thus, while many Haitians do support the idea, others fear it will quickly become politicized and thwart Haiti’s democratic progress.

With End of UN Mission Ahead, Haiti Seeks to Revive Its Military 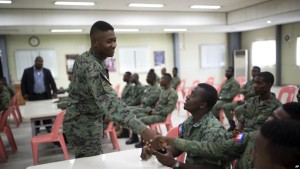 GRESSIER, HAITI — Their heads held high and chests puffed out, nearly 100 Haitian men in camouflage fatigues do jumping jacks or march around an abandoned U.N. compound on a recent morning. But after a few drills, they seek shelter from the blazing sun in the absence of anything else to do.

As U.N. military peacekeepers prepare for a full exit from this Caribbean nation, this small engineering corps is the first wave of Haiti’s efforts to try to revive a military force 22 years after a national army was disbanded. While Haiti is a long way off from having a real military, these initial efforts to build up a defense force at whatever level excites some and unnerves others.

“We’re proud Haitians and we want to make the nation stronger,” said Lieutenant Ted Tesnor Wolsby, a base commander in the brigade that has received months of military training in Ecuador but has only intermittent duties fixing irrigation ditches or roads back in Haiti for salaries starting at $318 a month.