On May 22, the Department of Homeland Security (DHS)  Secretary John Kelly extended Temporary Protected Status (TPS) for Haitian nationals for only six months instead of the usual 18 months. This was a disappointing decision and U.S. lawmakers, Haitian American community, immigration advocates and faith-based groups were dissatisfied and vowed to stay mobilized. DHS’ decision reflects poorly Haiti’s current conditions. It also fails to take into account the Haitian government’s direct request  to redesignate “TPS for at least 18 months” for Haiti. While the DHS’ decision is not a total victory, it does reflect the power of the advocacy groups such as Institute for Justice and Democracy in Haiti (IJDH) whose work on that front has broadened support for TPS extension.

Visit our immigration page for more information about TPS extension.

How Mobilization Won a Partial Victory on Haiti TPS 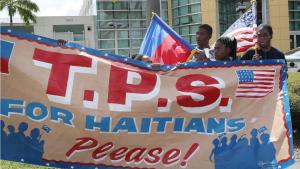 Secretary John Kelly’s May 22 announcement that the Department of Homeland Security (DHS) will extend Haiti’s Temporary Protected Status (TPS) designation for only six months rather than the usual 18, and may not extend it again, ignored the facts.  But that he didn’t kill it altogether, as anti-immigrant zealots around him were urging, is testament to a continuing advocacy campaign.

Haiti is a textbook case for TPS, which was granted in 18-month increments after the massive 2010 earthquake, which killed 250,000. Quake recovery remains incomplete: tens of thousands remain homeless. An unchecked cholera epidemic introduced by U.N. peacekeepers in October, 2010 has killed 9,700 Haitians and sickened over 800,000 to date. Hurricane Matthew last October killed 1,000 Haitians and affected two million more, caused Haiti nearly $2 billion in damage, destroyed crops and animals and inundated broad regions, left hundreds of thousands without safe water, exacerbated the cholera epidemic, and has caused a widespread food insecurity crisis.[1]

Donald Trump’s victory upended such expectations, galvanizing into action by early March an ad hoc coalition of Haiti activists and others worried about the imminent threat to Central Americans and others with TPS. DHS’s Haiti decision would be a first test; it was due by May 23, 60 days before the July 22 expiration date.