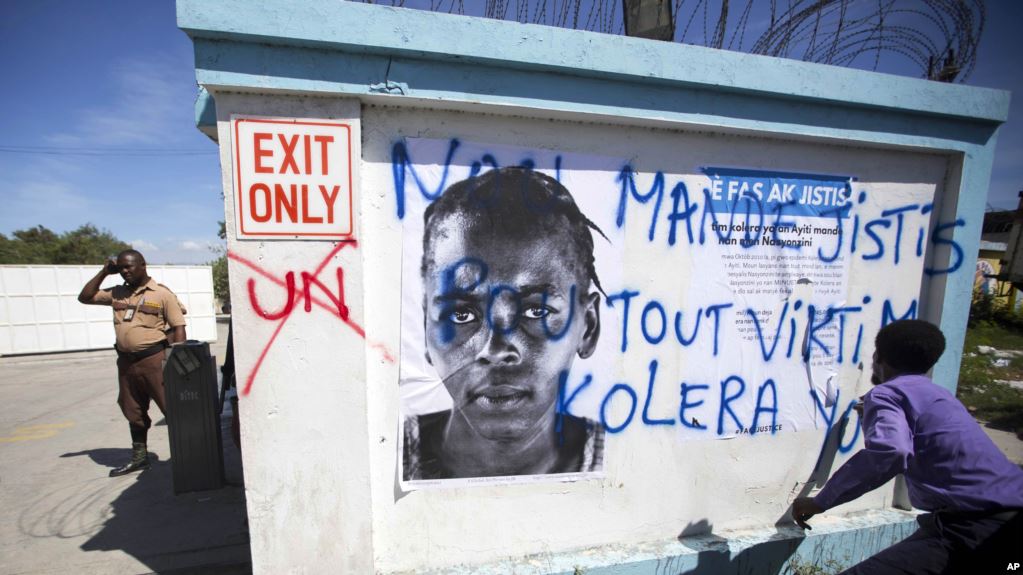 UNITED NATIONS, June 20 – While in some places the UN system may be doing good work, its killing of more and 10,000 Haitians with cholera, and its years of denial, have been a low point. Now with the UN Security Council slated to visit Haiti from June 22 and 24 — Inner City Press will cover it — the strange and some say shameful history of the UN’s MINUSTAH mission comes to the fore.

After the UN Security Council on April 30, 2004 approved the deployment of MINUSTAH, by September 30, 2004 protesters were being killed, then further protesters arrested and loaded into UN Armored Personnel Carriers. Particularly given the position of CARICOM and the African Union, this was a low for the UN. But it would go lower still. On June 20, 2017 the departing MINUSTAH mission will hold a ceremony to close its regional bureau in the south, again bragging of spending $48 million. But given the reneging on much larger sums for bringing cholera, advocates slammed the “statement delivered by Deputy Secretary-General Amina Mohammed in a briefing to the General Assembly appealing for member state funding and reporting on the UN’s progress in implementing the New Approach.

Ms. Mohammed announced that the UN proposes taking a ‘community approach and establish[ing] priorities for projects in consultation with victims and their families and communities.’ The statement reverses the UN’s previous position, which committed to assessing the feasibility of individual victim payments before making any decision, including through ‘consultations on the ground with victims and their communities.’

Mario Joseph, Managing Attorney of the Bureau des Avocats Internationaux said that ‘Powerful governments’ refusal to allocate even MINUSTAH’s leftovers to save lives from the cholera outbreak it caused demonstrates their lack of commitment to Haiti, to UN accountability and to the rule of law. Since the cholera epidemic started in 2010, these governments have found $4 billion to maintain soldiers in a country that has not had a war in anyone’s lifetime, and want to continue spending money on an unwanted peacekeeper presence, but they cannot find 1% of that amount to fight the worst cholera epidemic in modern times.” This is a pattern on which we’ll have more.

After then-President Aristide was forced into exile in, echoing today, the Central African Republic, the UN Security Council on April 30, 2004 dutifully created a mission to take over from the US, French and Canadian troops who has deployed during Guy Philippe’s force’s killing spree. Promoting it was then French Ambassador de la Sabliere, self-described father of the UN’s since-questioned (at least on Yemen) Children and Armed Conflict mandate. Given today’s Security Council splits, particularly on regime change, one marvels that Resolution 1542 was passed unanimously. Already in the mix was, for example, Haitian rights attorney Mario Joseph, now an astute critic of the UN’s total evasion of responsibility for killing over 10,000 Haitians with cholera. We’ll have more on this.

On June 14, 2017 the new (well, 162 day old) UN presented what it called a new approach on cholera – not long after Secretary General Antonio Guterres’ delayed approach to the UN’s lead poisoning victims in Kosovo was criticized. Inner City Press asked the UN about it on June 16, in the run-up to the UN Security Council’s visit to Haiti next week (we will cover that).