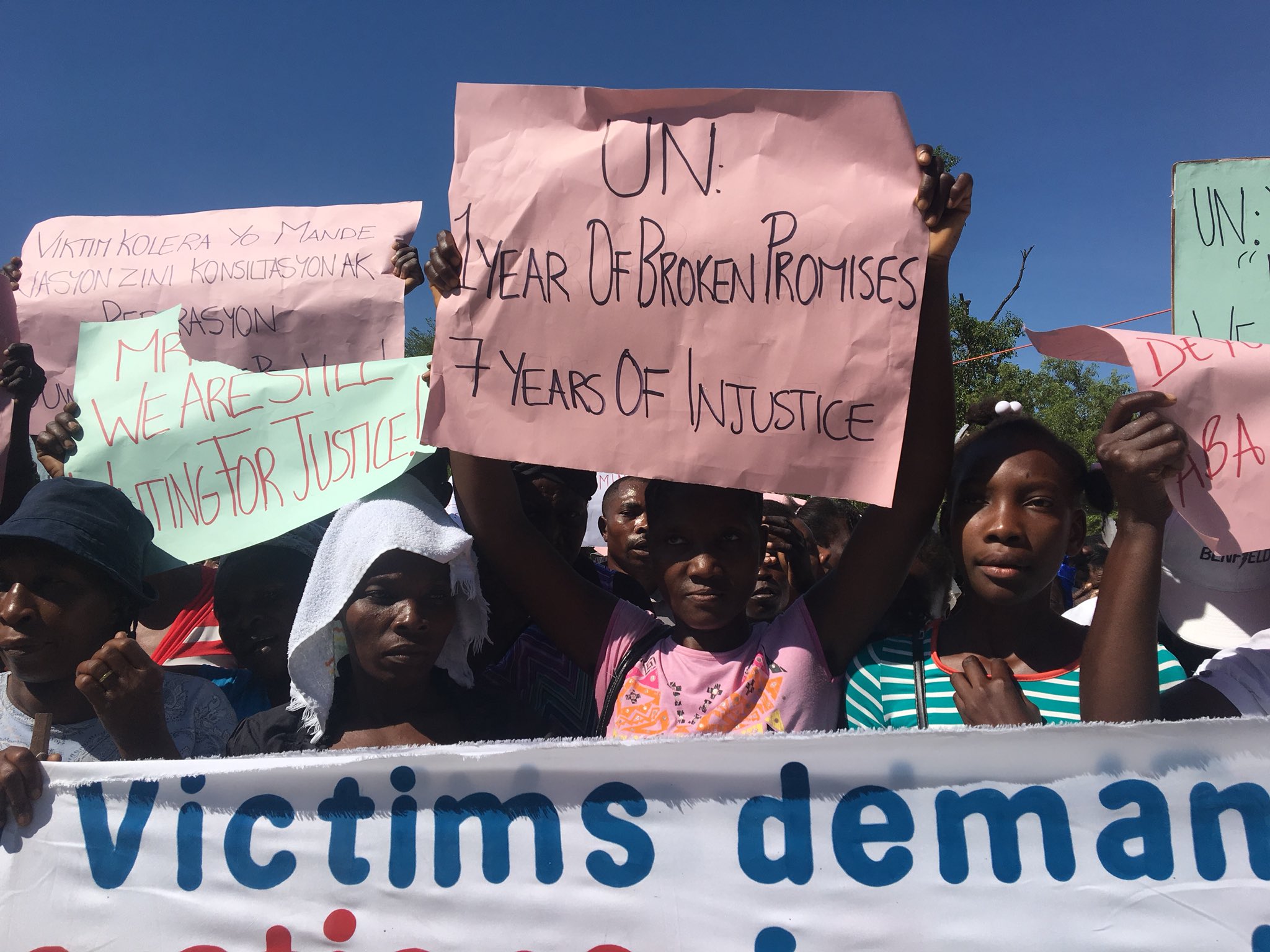 Port-au-Prince, November 6, 2017 – Advocates for Haiti’s cholera victims welcomed UN Deputy Secretary-General Amina Mohammed and UN Special Envoy on Haiti Josette Sheeran’s meeting with a group of victims this weekend as a positive first step towards respecting Haitians’ dignity and right to consultation. The meeting between Ms. Mohammed, Ms. Sheeran and five cholera victims took place on Saturday 4 November at the Bureau des Avocats Internationaux (BAI), the legal office that has led the fight for justice for Haiti’s cholera victims, as part of the UN high-level delegation’s visit to Haiti. The newly-appointed Special Representative of the Secretary General and head of MINUJUSTH, Susan D. Page, and Deputy Special Representative Mamadou Diallo were also in attendance.

“Victims have been demanding that the UN speak with them directly for years, and for years the UN has ignored them. The UN now must build on this important first step and engage in a comprehensive consultations process with victims and be guided by their perspectives. It is not for the perpetrator to decide what is justice for the victims” said Mario Joseph, Av., Managing Attorney of the Bureau des Avocats Internationaux, who brokered and participated in the meeting.

During the meeting, which the parties agreed would be off the record, victims testified about the devastating effects cholera has had on their lives, including losing their jobs because of stigma around the illness, seeing loved ones die and having to assume the care of orphaned children who they now cannot afford to put through school, and ongoing health effects. They appealed to the high-level delegation to ensure the UN compensates them for their losses. The Deputy Secretary-General responded, and also addressed a larger group of victims gathered at the BAI following the meeting.

The meeting comes 11 months after the UN formally committed to consulting with victims and placing them at the center of the development of a $200M remedial package promised as a part of the UN’s “New Approach to Cholera in Haiti.”  In May 2017, Secretary-General Guterres retreated from that commitment, however, stating that no consultations could begin until the UN received an assurance of funding from its members.  To date, only 3% of the funds needed have been raised.

“We are hopeful that the Secretary-General has come to recognize that a new UN partnership in Haiti will only start when the UN recognizes victims’ humanity, dignity and rights. This scandal cannot be resolved unless the UN allows victims a voice in the process,“ said Sienna Merope-Synge, Staff Attorney with the Institute for Justice & Democracy in Haiti, the BAI’s U.S.-based sister organization.

The New Approach set forth two potential components of remedies: individual assistance, and community projects.  Since launching the plan last December, however, the UN has increasingly abandoned individual assistance as an option, despite victims in Haiti voicing a strong need for remedies to address the crushing economic consequences of the disease.

Since cholera broke out in 2010, it has killed at least 10,000 people and left countless children orphaned. During that time, the UN has spent $4 billion on MINUSTAH, the peacekeeping force that brought the disease to the country. It has raised only $12 out of the $400 million promised for its New Approach to Cholera.