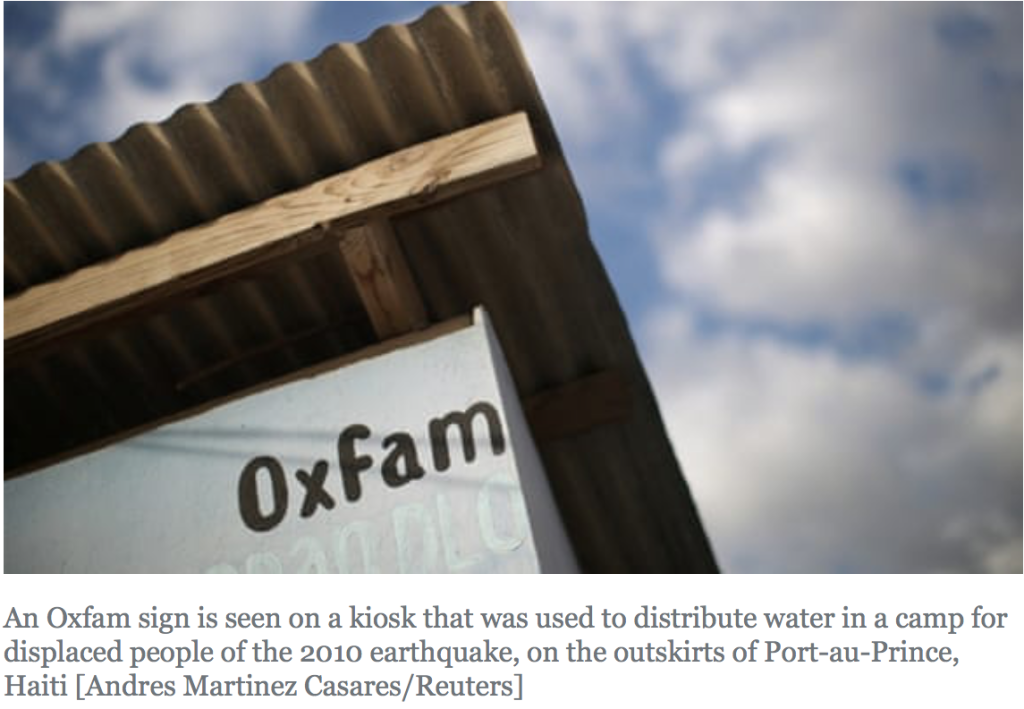 The backlash against Oxfam continues to grow, but the scandal is just the tip of the iceberg of unaccountable “humanitarian” action in Haiti.

In the wake of revelations that its staff solicited prostitutes in post-earthquake Haiti, Oxfam has pointed to an internal investigation that led to senior employees resigning or being fired, and released a new 10-point plan to eradicate sexual abuse. But what is striking is that the charity never treated its staff’s abuses as a legal matter. Let’s be clear: this behaviour wasn’t just unacceptable, it was unlawful. Prostitution is illegal under Haitian law and if minors were involved, this was also statutory rape. The behaviour also constituted illegal child prostitution under UK law, and British courts retained jurisdiction to prosecute. Yet Oxfam didn’t report the conduct to Haitian authorities and none of its staff have faced criminal charges. Instead, senior workers were allowed to resign quietly. Several moved into jobs with other NGOs that put them in continued contact with vulnerable women and children.

I wish this was surprising, but as a lawyer working on abuses by humanitarian actors in Haiti, I have learned that accountability is the exception, not the norm. Any Haitian can tell you about the damage caused by those supposedly sent to help them: the missionaries who abuse children in orphanages, the UN peacekeepers who rape and sexually exploit Haitian women and children, almost invariably with no consequences. Nor is this confined to sexual abuse. The post-earthquake response in Haiti was a showcase in accountability failures, exemplified by the American Red Cross “losing” $500m intended for post-earthquake housing. The UN still refuses to pay compensationÂ to the more than 10,000 Haitians who have died from the cholera epidemic its peacekeepers started by recklessly disposing of contaminated waste.

There is a common thread that enables these abuses. The UN and international NGOs like Oxfam operate in Haiti as if the law did not apply to them. If charity workers were found to have sexually abused children in the UK, or the UN recklessly caused the death of thousands of people in New York, there would be court cases, jail time, damages awards. But in Haiti, these same behaviours are treated as internal disciplinary matters, or organisations respond with new policy standards, while skipping over accountability altogether.

It’s not that legal obligations don’t exist in Haiti, it’s that humanitarian organisations simply ignore them. Ironically, Oxfam is usually one of the better NGOs when it comes to accountability to the people it serves. It was one of the original groups involved in the Sphere project, which established minimum standards for international humanitarian responders, and has consistently supported treating aid recipients as rights holders. Yet Oxfam leadership justified its failure to refer abuses to Haitian authorities on the grounds it was “extremely unlikely action would be taken” – a self-fulfilling prophecy if ever there was one.

Where does this disdain for the law come from? In my experience, from a set of often unspoken, but commonly held beliefs in the humanitarian sector: that Haiti is a place where messed up things happen all the time, and so are somehow less serious than if they occurred elsewhere. That UN and NGO personnel are experts who ultimately know better than national actors what is best. Perhaps most pervasively, that humanitarian organisations are serving a greater good that justifies a certain amount of collateral damage to protect the organisation – even when it’s measured in people’s lives. That is how Oxfam comes to cover up a sex scandal to protect the charity’s reputation, or how the UN justifies refusing to pay compensation to cholera victims because financial liability might discourage future peacekeeping efforts. We should also be honest here: these attitudes would not exist if Haitians were white.

The impunity rife in the humanitarian sector not only breeds abuse, it undermines the effectiveness of international work. The UN has spent hundreds of millions of dollars in Haiti to promote human rights and the rule of law, yet its efforts are seen as a hypocritical farce by many Haitians. Oxfam will spend years rebuilding its reputation, and may never regain trust in Haiti.

To Oxfam’s credit, it’s new sexual abuse plan includes a commitment to proactively working with local authorities, and it says it has now shared the names of the men involved in the sex scandal with the Haitian government. This probably comes seven years too late for the women affected, but if the commitment is taken seriously – a big if – it could contain the seeds of long overdue change. Humanitarian organisations will never truly help Haiti, or any other country, unless they are willing to treat the people they claim to serve as equals. That means respecting their legal rights, including their right to accountability when those rights are violated. It’s time to hold these organisations and their staff to the law.

The views expressed in this article are the author’s own and do not necessarily reflect Al Jazeera’s editorial stance.

COVID-19 brings renewed urgency to remedies for cholera in Haiti

Her Name Is Untac: UN Peacekeepers’ Forgotten Children in Cambodia

Haiti’s Army Is Making A Comeback 20 Years After Disbanding