The Flag of Freedom: IJDH’s Executive Director Addresses Haitian community in Rhode Island On the 215th Anniversary of Haitian Flag 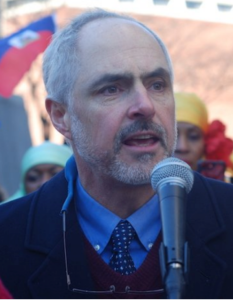 Bonswa! Kouman ou ye? Good evening. Chapo ba– a tip of the hat, to Bernard Georges and New Bridges for Haitian Success for organizing such a wonderful event. On behalf of everyone at the Institute for Justice & Democracy in Haiti, I would like to congratulate the Haitian Community of Rhode Island, and all Haitians, in Haiti and abroad, on the 215thanniversary of the creation of the Haitian Flag, and on the 214 years of independence that the flag represents.
I am a human rights activist, and I believe that along with Haitians, everyone who cares about human rights should celebrate May 18. Because Haitians were the original founders of the Human Rights movement. Haitians were the first to make human rights apply to everyone, to make them universal.
The French proclaimed “liberté, egalité, fraternité” 14 years before the Congress of Arcahaie, but they did not mean egalitéor libertéfor everyone. The United States proclaimed that “all men are created equal” 27 years before the Congress of Arcahaie, but did not really mean “all.” When Haitians came together in May 1803 in Arcahaie and agreed to fight under a single flag, they fought to create the first nation in history that would give basic human rights to everyone, without exception, without exclusion.
We say that Haiti was the first free black nation, and there is much to celebrate in that. But Haiti was also the first free nation, at least in the Americas. The US was independent first, but it is hard to call a nation “free,” when it is addicted to slavery. Slavery was, of course, a horror for those enslaved, but it also deeply undermined the moral, spiritual and social lives of those who tolerated slavery. They gained material advantages from the system, but lost their souls in the bargain.
215 years after the Congress of Arcahaie, the human rights movement is still fighting to fulfill the Haitian revolution’s promise of truly universal rights.
There are still battles to fight in Haiti of course. Limitations on the right to vote leave the majority of Haitians unable to demand that their government provide basic government services such as education, healthcare and honest administration.
There are battles to fight outside Haiti too.  215 years later, the international community has still not accepted that the Haitian flag represents an independent, sovereign nation. The international community imposed an unjustified occupation on Haiti for the last 14 years, and routinely interferes in Haitian elections. The UN brought a cholera epidemic that killed 10,000 Haitians, then refused to respect its legal obligations to the cholera victims, a respect it certainly would have shown had the victims been in New York instead of Haiti.
Haitians have been contributing to the United States ever since the battle of Savannah in 1779, serving as professionals, political leaders, community pillars and valued workers. But the United States has not always respected the human rights of Haitians in our country. We have too often imposed discriminatory immigration policies, justified by racism. This discrimination is a betrayal of America’s own ideals, of our stated commitment to human rights, and of our own ancestors who immigrated to this country.
There is no better example of racist immigration policy than the Administration’s termination of TPS for Haiti last November. The government’s own documents explain how the precarious conditions in Haiti justified a continuation of the program. The President’s own words demonstrate that the decision to terminate TPS was not based on the facts in Haiti or on US law, but on the President’s racist and uninformed stereotypes of Haiti and its people.
The termination of TPS is hurtful to the 50,000 beneficiaries of the program, as well as their children, employers, friends and neighbors. But it is also hurtful to everyone in America. When we betray our own ideals, and treat some people differently because of the color of their skin, that undermines the moral, spiritual and social lives of all of us.
So, it is up to all of us to fight back. Sometimes the fight to fulfill the promise of the Congress of Arcahaie seems too hard, that there are too many obstacles ahead of us. It is true that we face obstacles, and everyone knows that dèyè mon gen mon– behind mountains there are more mountains. But our obstacles are nothing compared with the obstacles faced by General Dessalines, General Christophe, General Petion, and by Catherine Flon. They were facing the world’s strongest army, fighting for freedom in a world dominated by slaveholders. But they came together, and they won. Inite fè lafòs.
We have been winning in the 21stcentury too. In the fight for TPS, the Haitian communities in Providence, Boston, New York, Miami and many other places came together and spoke with one voice. They joined with allies from other nationalities, and political leaders, including Rhode Island Senators Sheldon Whitehouse and Jack Reed, and Rhode Island Representatives David Cicilline and, Jim LangevinInite fè lafòs. And although we did not win a renewal of TPS, we did win a year’s extension, that allows us to keep fighting. We are fighting now in the courts, where we are challenging the racism behind the TPS decision. We will have an opportunity to fight at the ballot box in November, and can elect a Congress willing to pass laws respecting immigrants’ rights and respecting our proud tradition as a nation of immigrants.
We have not yet forced the UN to fully respect the rights of cholera victims, but we have built a wonderful network of people in Haiti, Haitians in the US, human rights activists, and members of Congress, among others. This network forced the UN to acknowledge some responsibility for cholera, and to promise $400 million to stop cholera and help the victims. The UN has not raised the money yet to keep its promise, but the network will keep fighting until it does. Inite fè lafòs.

It has been a privilege and an honor to join you for the celebration of the 215thanniversary of the Haitian Flag. I look forward to working with you over the next year to continue the fight to make the dream of universal human rights declared at the Congress of Arcahaie a reality. At the Institute for Justice and Democracy in Haiti, we would love to speak with any organizations or individuals looking for an opportunity to continuing the fight on TPS and cholera. I also look forward to next year, when we can celebrate the 216thanniversary of the flag, but also safety for 50,000 Haitian beneficiaries of TPS, and the UN keeping its promise to the victims of cholera.
Bòn fèt drapo!