This page is dedicated to the 10 year cholera anniversary in Haiti. Cholera was introduced to the country in October 2010 by UN peacekeepers.

This month marks the 10 year anniversary of the UN’s introduction of cholera to Haiti through its peacekeepers, sparking an epidemic which has killed nearly 10,000 and infected more than 800,000, according to official numbers. The first documented victim was diagnosed with cholera on October 12, 2010, and died shortly thereafter.

In the 10 years since the introduction of cholera, the UN’s response has amounted to a violation of victims’ right to effective remedy. The UN denied its role in the epidemic for six years before apologizing to Haitians and promising a $400 million response in line with what it termed a “moral responsibility”. Only $20 million has been raised, and only $14 million has been spent to date. As noted by an unprecedented number of the UN’s own human rights experts in April 2020 via an allegation letter to Secretary-General Antonio Guterres, the UN’s response “was a critical failure…in providing adequate remedies to victims of the cholera epidemic.” This letter was prompted by a formal complaint filed by the Bureau des Avocats Internationaux (BAI), the Institute for Justice & Democracy in Haiti (IJDH), and the International Human Rights Clinic at Harvard Law School. Despite the clear and specific concerns raised by the UN’s own independent experts, the Secretary-General’s response ignored the core issue of the victims’ rights and the UN’s legal responsibility.

The Organization’s continued denial of legal responsibility for the cholera epidemic, failure to have established an independent mechanism through which victims’ claims could be assessed, and denial of individual compensation to those most affected has meant that families continue to suffer devastating social and economic consequences as a result of the disease. The UN had eight years following the epidemic to establish a standing claims commission in line with its obligations under the Status of Forces Agreement (SOFA) it signed with Haiti in 2004, when it established its peacekeeping presence in the country.[1] Shockingly, the UN has never established such a commission in any country where it has had a peacekeeping mission, despite signing agreements that provide for commissions in the event of a dispute.

For the past decade, IJDH and BAI have worked alongside cholera victims to seek justice and accountability. We have called on the UN to accept legal responsibility for, and offer restitution to, the victims of cholera, who have already suffered and lost too much. In April 2020, the UN’s independent experts additionally addressed a letter to the Government of Haiti, encouraging its role to defend and support victims’ call for justice, and to bring the issue of effective remedy to the International Court of Justice. As BAI wrote to the Haitian government in a recent letter, “the Haitian State could contest the immunity that the United Nations confuses with impunity.” Haiti is not alone, however. The UN’s handling of mass human rights claims around the world, arising largely in the context of peacekeeping, has failed. Host countries are often unwilling or unable to demand recourse from the UN for their citizens, reflecting the structurally unequal power dynamics between these countries and the international organization.

We urge Secretary-General Guterres, as we have in our open letter, to heed the call of victims over the past 10 years, and that of the UN’s own experts to both recognize and correct course from the “past failures and ongoing violations” and accept legal responsibility. As Mario Joseph, the managing attorney at BAI, noted at a cholera commemoration event this month, the cholera epidemic was two catastrophes. The first was the death and suffering caused directly by the epidemic; the second was the undermining of Haitians’ dignity and human rights caused by the UN’s denial of justice and refusal to remedy the victims.[1] The SOFA requires that claims settled through a commission be submitted no later than one year after the termination of the UN’s peacekeeping mission (MINUSTAH) mandate. MINUSTAH’s mandate terminated on 15 October 2017. As such, the process for its establishment needed to be initiated before 14 October 2018 to ensure that victims could submit claims before the deadline.

In September and October of 2020, the Bureau des Avocats Internationaux interviewed Haitian men and women afflicted by cholera. These interviews were conducted in recognition of the ten year anniversary of U.N. peacekeeping troops introducing cholera into the region in October 2010.

Watch the following interviews with Levi, Pierre, and Elise in Haitian Kreyol with English subtitles, and learn more at http://www.ijdh.org/choleraaccountability/. Original video by Wesly Gedeon. Subtitled and edited by Jane Regan. 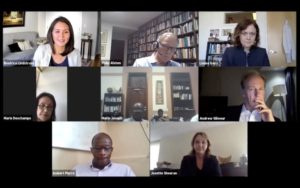 10 Years On: Lessons from the Cholera Epidemic in Haiti (Kreyòl subtitles included)

Watch BAI’s Mario Joseph participate in a panel event to examine what lessons the UN should draw from the cholera epidemic, hosted by the Human Rights Program at Harvard Law School.