(See also IJDH sections on Cholera Accountability and “DHS Should Extend TPS for Haitians.” Interviews with Brian Concannon and Mario Joseph follow the “News and Opinion” section below.)

After 19 hours of debate — through the night — Haiti welcomes a new government – Miami Herald, March 21, 2017 (graphic description at 5th paragraph from end of article)

Haiti: Humanitarian Funding Overview (as of 16 March 2017) – UN Office for the Coordination of Humanitarian Affairs , March 15, 2017

Letter to Secretary of State and USAID Regarding US Assistance to Haiti Senator Nelson and Representative Wilson. November 28, 2016

Living in the aftermath of Hurricane Matthew – Reuters, November 10, 2016

Funding for Hurricane Matthew Flash Appeal only at 31% United Nations Office for the Coordination of Humanitarian Affairs. October 31, 2016

Rights of Persons with Disabilities in Times of Disaster by Emilio Neas. Disability Rights Fund. October 23, 2016

Reports and Briefings on Haiti since the hurricane ACAPS. October 5-21, 2016

Dr. Paul Farmer Is ‘Surprised And Upset And Humbled’ After Visit To Haiti by Marc Silver. NPR. October 21, 2016

Deportation to a disaster zone: Obama under pressure to stop crackdown on Haitian migrants as

Hurricane Matthew Has Exacerbated the Debt We Owe to Haiti by Michael Posner, Newsweek. October 7, 2016.

Petition to Halt Deportations to Haiti 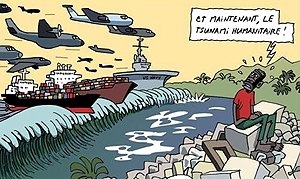 What You Need To Know If You’d Like To Help Post-Hurricane Haiti by Eleanor Klibanoff. NPR. October 15, 2016

Guidelines for Helping in the Aftermath of Hurricane Matthew Roots of Development. October 6, 2016

As Hurricane Matthew Death Toll Tops 100 in Haiti, Do’s and Don’ts for Americans Who Want to Help by Ansel Herz. The Stranger. October 6, 2016

The Big Truck that Went By: How the World Came to Save Haiti and Left Behind a Disaster by Jonathan M. Katz. 2015 (book)