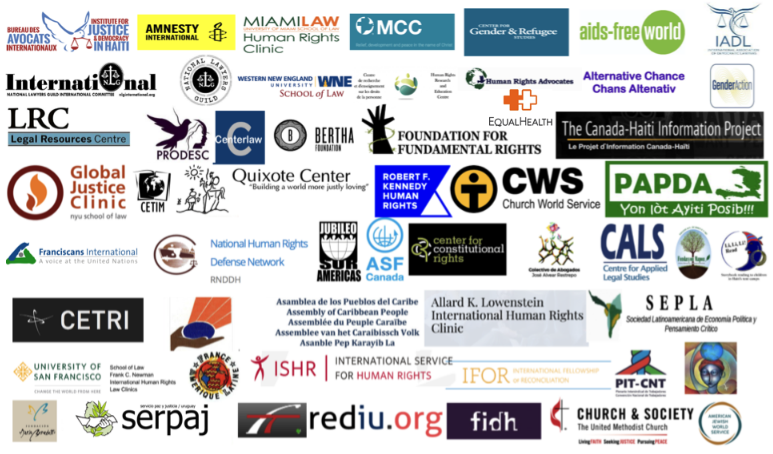 We write to you as organizations that share the UN’s goal of promoting human rights to express our concern regarding the situation of cholera victims in Haiti, and their right to access effective remedies.

For six years, the UN denied legal responsibility for sparking the Haiti cholera epidemic, in the face of overwhelming scientific evidence that UN peacekeepers had introduced the disease. This denial was rightly met with global outcry; the UN Special Rapporteur on Extreme Poverty & Human Rights labelled it “morally unconscionable, legally indefensible, and politically self-defeating.” The refusal to accept accountability in Haiti hurt both the victims and the UN’s credibility and standing worldwide.

As organizations committed to the protection of universal rights, including the fundamental right to a remedy, we were pleased to see the UN begin to make amends in 2016 by apologizing to the Haitian people and launching a new plan to eliminate cholera and redress victims (the ‘New Approach to Cholera in Haiti’). The UN’s pledges to provide a “material assistance package” to those most affected by cholera, and to “put victims at the centre of the work” and consult with them in developing the assistance package were encouraging. So too was the UN’s undertaking to consider assisting victims through not only a community-based approach but also through “payment of money to the families of those individuals who died of cholera”, and to consulting with victims on this question. Taken together, these commitments represented important progress towards fulfilling victims’ right to a remedy.

In order to discharge its duties to victims and their relatives, the UN must now ensure that these promises are kept and that human rights are put at the center of its new plan. Yet almost eighteen months after the launch of the New Approach, we are increasingly concerned that the UN is once again retreating from accountability. Meaningful victim consultations have not been conducted and, yet, the UN appears to favor community solutions for victims with no plan to explore individual payments. This does not align with your assurances of a participatory approach in your Op-Ed in the Miami Herald in November 2017 where you promised a “new spirit of partnership” with the Haitian people and promised “meaningful community and individual consultations with victims of cholera” to “inform our response and future work in providing support to those affected by the tragedy”.

A rights-based, victim-centered response requires meaningful participation by victims at every step of the process. Victims must be consulted about all decisions regarding the response, including the balance between community projects and individual payments to victims. Decisions must be implemented in conformity with the victims’ priorities and perspectives. The UN’s limited interaction with victims to date falls a long way short of this standard.

As the UN’s Track 2 “material assistance” package begins to take shape, it is concerning that the UN has engaged in no public discussion of individual compensation and has instead reported upon the challenges of implementing such an approach while pursuing its preferred community development model. This is particularly troubling given the UN’s responsibility to ensure a full, effective and transparent remedy, including meaningful compensation for victims, pursuant to established human rights principles including the Basic Principles and Guidelines on the Right to a Remedy and Reparation for Victims of Gross Violations of International Human Rights Law and Serious Violations of International Humanitarian Law. The provision of compensation for deaths and injuries is also prescribed by Haitian law and the UN’s own legal framework governing third-party claims.

While establishing collective projects can be a form of reparation, projects alone do not sufficiently respond to victims’ individualized harms or constitute adequate restitution. Eight years into the epidemic, victims continue to suffer gravely. Thousands of families who lost primary income providers or livelihoods and were forced to meet high medical and burial costs from cholera have been plunged deeper into poverty. Children orphaned or forced to leave school are being condemned to another generation of poverty. Individual compensation is a principal component of the right to a remedy and reparations, and cholera victims have long advocated for it. While there are no doubt challenges to this approach, engaging victims as partners in the New Approach plan is likely to assist the UN in surmounting these obstacles. Ultimately, a decision to abandon compensation cannot be made without the victims.

The UN has an opportunity with the New Approach to help rebuild the lives of thousands of cholera victims and set a powerful example that the UN will embody the principles of human rights and rule of law that it promotes to others. Conversely, the success of the recently established UN Mission for Justice Support in Haiti (MINUJUSTH) could be greatly undermined if the UN fails to live up to its pledges.

In the context of the UN’s release of its subsequent follow up report on the New Approach, we strongly encourage you to exercise your leadership to maximize this opportunity, and to transform the UN’s promises into concrete results, for the people of Haiti and for the UN.