IJDH applauds Secretary Mayorkas’s December 5 announcement that DHS will redesignate Haiti for TPS, an announcement which recognizes that current conditions in Haiti make it impossible for the United States to safely deport people there now.  See here and the DHS announcement here.

And no one can apply yet, even if they arrived before November 6, because DHS must first publish a Federal Register notice outlining application procedures.  As the DHS announcement states, “A soon-to-be-published Federal Register notice will explain the eligibility criteria, timelines, and procedures necessary for current beneficiaries to re-register and renew Employment Authorization Documents (EADs) and for new applicants to submit an initial application under the redesignation and apply for an EAD.”

DHS is not expected to publish the Federal Register notice for many weeks or even a few months.  (Last year, it took about three months for them to publish the  notice.)

Haitians in the community should therefore beware of unscrupulous practitioners saying they can apply for them now.  They cannot do so!

USCIS Automatically Extends the Validity of Haitian TPS and Work Permit Documents Through December 31, 2022 — And Information for Haitians Who Think They May Qualify for TPS Under the August 3, 2021 Haiti TPS Redesignation

USCIS on August 3, 2021 redesignated the country of Haiti for TPS for an 18 month period by publishing a notice in the Federal Register, the government’s official publication.  Under the Federal Register Notice (FRN), Haitians who think they may be eligible for TPS have until February 3, 2023 in which to apply for it.  To qualify, among other requirements, Haitians must have already been living in the United States on July 29, 2021.  If you think you may qualify, you are strongly advised to consult a competent and experienced immigration attorney for advice before filing an application to make sure that applying is a wise course of action for you given the facts of your own individual case.  (And watch out for unscrupulous persons in the community who are unauthorized to practice law and who may take your money and actually badly harm your case.)

Although the August 3 FRN gives Haitians 18 months (to February 3, 2023) to apply for TPS and also for a work permit if they want one, Haitians may wish to apply sooner in the process rather than later.

Haitians who got TPS after the 2010 earthquake and are protected by the agreement in the Ramos federal court litigation have a new and important additional protection.  On September 10, 2021, USCIS published a new FRN once again automatically extending the validity of their TPS and work permit documents, this time through December 31, 2022.  (“DHS is automatically extending the validity of TPS-related documentation for beneficiaries under the TPS designations for El Salvador, Haiti, Nicaragua, Sudan, Honduras, and Nepal through December 31, 2022….”)

This is the fifth such FRN pursuant to the agreement in Ramos automatically extending the validity of their documentation, and like all FRNs, it has the force of law.  Employers and Departments of Motor Vehicles must honor those TPS and work permit documents as valid through December 31, 2022, regardless of the actual date on them.  Any Haitian who currently has TPS does not need to do anything at all or to pay any money or fee at all to enjoy this protection, although as explained below they may wish to file an application for work authorization sooner rather than later under the new August 3 Haiti TPS redesignation FRN.

This is because no further automatic extension beyond December 31, 2022 is expected and, importantly, because there is a seven to eleven month (or even longer!) backlog in adjudicating and approving work permit applications!  This means that even though the work permits of Haitians who already have TPS have been automatically extended and will remain valid through December 31, 2022 per the September 10, 2021 FRN, those Haitians who do not also apply for a new work permit document well in advance of December 31, 2022 may find themselves on that date without work authorization!  To avoid that risk, and the risk of possibly losing their jobs or driving privileges, Haitians who currently have TPS and work authorization under the 2010 designation and the agreement in Ramos may wish to apply for TPS sooner rather than later during the new TPS redesignation application period which began on August 3.

Those Haitians who do not currently have TPS but who think they may qualify under the new August 3 Haiti TPS redesignation because, among other eligibility requirements, they were already physically present in the United States on or before July 29, 2021, are strongly urged to consult a competent and experienced immigration attorney to see if they should apply.  Because of the backlog of seven to eleven months or even longer in adjudicating work permit applications described in the preceding paragraph, they may wish to apply not only for TPS but also, if desired, for a work permit sooner rather than later during the 18 month application period.

For questions about any of this or possible referrals, please feel free to contact IJDH immigration policy coordinator Steve Forester at steveforester@aol.com or 786 877 6999.

Redesignation of Haiti for TPS on August 3, 2021

The Department of Homeland Security (DHS) on August 3, 2021 redesignated Haiti for Temporary Protected Status (TPS) for a period of 18 months, by publishing a Federal Register Notice (FRN).  To be eligible to apply for TPS, Haitians, among other requirements, must have been and remained physically present in the United States continuously since on or before July 29, 2021.  (No one who arrived in the United States after July 29, 2021 is eligible.)  Haitians who think they may be eligible for TPS may file an application, and an application for a work permit, anytime from today through February 3, 2023, a full 18 months.
TPS has many eligibility requirements.  So it is extremely important for Haitians who think they may be eligible to apply to consult a competent and experienced immigration attorney in your area before filling out the TPS application form!
If you need help locating a competent and experienced immigration attorney in your area to help you, please feel free to contact IJDH’s immigration policy coordinator, Steve Forester (steveforester@aol.com, 786 877 6999), and we will try to give you some leads.  Please also feel free to call with any questions.
Previous Posting:

If you are a Haitian with currently valid TPS, your TPS documents are remain legally valid through October 4, 2021.  Employers and state DMVs must honor them as legally valid through that date.  This is because on December 9, 2020, U.S. Citizenship and Immigration Services (“USCIS”), as it has done three times previously, published a new Federal Register Notice (“the Notice”) automatically extending the validity of your TPS documentation, this time through October 4, 2021.
The Federal Register is the official publication of the U.S. Government; its notices have the force of law.  Importantly, no one with TPS needs to file, do, or pay anything at all, to anyone, to benefit from this extension, which is automatic!  Again, Haitians with TPS do NOT need to re-register; they do not need to file anything at all.  Just inform your employer or the DMV about this new Federal Register Notice!
As the Notice states, “DHS is automatically extending the validity of TPS-related documentation for beneficiaries under the TPS designations for El Salvador, Haiti, Nicaragua, Sudan, Honduras, and Nepal for nine months through October 4, 2021, from the current expiration date of January 4, 2021.”
USCIS published this Notice to meet its legal obligations under two federal court cases, as the Notice states in its “Summary.”
For more information, or if you need help explaining this automatic extension to your employer, please contact Steve Forester, IJDH Immigration Policy Coordinator, steveforester@aol.com, 786 877 6999.
(Separately, if you are a Haitian who used to have TPS, but who no longer has it because, in 2017 or 2018, you did not re-register for it under President Trump, you may be able to re-register for it for good cause.  If this applies to you, you are strongly advised to consult an attorney who is competent and experienced in immigration law, about whether or not trying to re-register for TPS would or would not be wise for you, since each person’s legal situation is different.  Feel free to contact Mr. Forester at the contact information given above if you have any questions about this.  But again, if you had TPS in the past but didn’t re-register for it under Trump, you are strongly advised to consult an attorney competent and experienced in immigration law to check whether trying to re-register for TPS now might or might not be possible and advisable for you.)
PDF Version here.

On November 4, 2019, U.S. Citizenship and Immigration Services (“USCIS”) published a new Federal Register Notice (“FRN”), extending the validity of Haiti TPS work permits and documents again, this time to January 4, 2021.
The Federal Register is the U.S. Government’s official publication; its notices have the force of law.  Importantly, no Haitian with TPS needs to pay or do anything to benefit from this extension, which is automatic.  You do NOT need to re-register or file anything; just inform your employer or the DMV about this new FRN.
As it states, “DHS is automatically extending the validity of TPS-related documentation for beneficiaries under the TPS designations for El Salvador, Haiti, Honduras, Nepal, Nicaragua, and Sudan, as specified in this notice. Such TPS-related documentation will remain in effect through January 4, 2021, from the current expiration dates of [January 2, 2020.]”
As with USCIS’s similar FRNs of October 31, 2018 and March 1, 2019, it published this one to comply with its legal obligations.  See USCIS’s thorough explanation at Update on Ramos v. Nielsen.
For more information, contact Steve Forester, IJDH Immigration Policy Coordinator, steveforester@aol.com, 786 877 6999
(Importantly, the U.S. Government also agreed in Ramos that those Haitians who used to have TPS, but who no longer have it because they didn’t re-register for it in 2017 or 2018, may now be able to successfully re-register for it for good cause!  Anyone to whom this applies is advised to consult a competent attorney experienced in immigration law about whether re-registering would or would not be wise for you, since each person’s legal situation is different.  But, if you had TPS but didn’t re-register under Trump, you are strongly advised to consult an experienced attorney to see if re-registering for TPS now may be possible for you!) 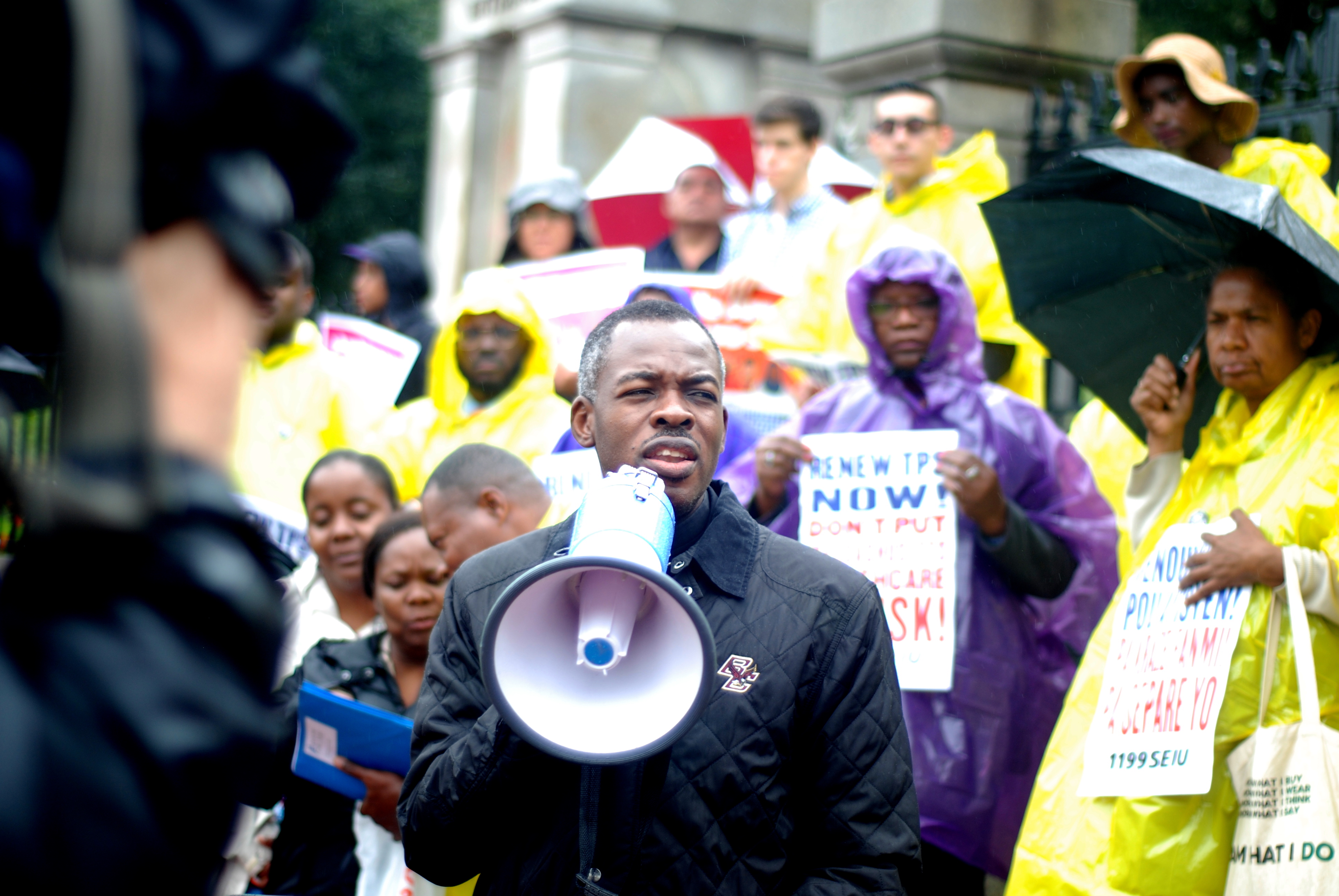 DHS on November 20 terminated Haiti TPS effective July 22, 2019, erroneously saying that Haiti had recovered from the January 2010 earthquake.  In doing so, it contradicted its own May 24 Federal Register rationale, in which it cited the cholera epidemic and Hurricane Matthew as justifications for extending TPS for six months, by erroneously stating it could not consider those two massive catastrophes in making its decision.  This inconsistency betrayed the White House’s anti-immigrant ideological agenda since any honest assessment of conditions would have mandated an 18-month extension.  (No one should be fooled by the 18-month grace period, an attempt to sugar coat an unlawful result.)
DHS’s decision ignored extensive recent editorial and bipartisan political support for an 18-month extension — editorial boards urged extension 20 times since the Spring, for example — and has been roundly condemned.
Four bills are pending in Congress which would enable Haitians with TPS to become permanent residents, although prospects are slim under the current Congress; litigation is also contemplated.
DHS on January 18 published a Federal Register notice automatically extending recipients’ work permits to July 21 and giving to March 19 to re-register. The notice’s unconscionable lateness, just four days before the expiration of documents, led to uncertainty, expired drivers’ licenses, and scams; it coincided with Haiti’s removal from the list of countries whose nationals may receive low-skilled workers visas. IJDH’s work remains important to protecting Haitian families from unjust immigration policies.
See also ReliefWeb; UN Office for the Coordination of Humanitarian Affairs (UN OCHA); Famine Early Warning Systems Network (FEWS NET) Haiti page; Food Insecurity after Hurricane Matthew, and Cholera Accountability.