WASHINGTON, D.C. (September 22, 2021) — Leaders of 39 human and civil rights organizations delivered the following letter to the White House on Tuesday evening to oppose the Biden administration’s violent expulsions of Haitian asylum seekers at the U.S-Mexico border and its recent move to appeal a federal court ruling that would have brought an end to additional expulsions of asylum-seeking families. The leaders warn the administration that these recent actions represent an inflection point for the president’s commitment to human rights and racial justice, and threaten to cement Biden’s legacy as a president who continued, rather than stopped, the Trump administration’s dismantling of the U.S. asylum system and targeting of Black, Brown and Indigenous immigrant communities.

Following is the text of our letter and list of signatories. Read Politico’s exclusive coverage here.

As leaders of civil rights and human rights organizations, we write at an inflection point for your Administration’s commitment to a humane and just immigration policy. In recent weeks your Administration has violated asylum rights and refugee laws enacted by Congress and embraced policies that inflict cruelty on Black, Brown and Indigenous immigrant communities. We fear that commitments made on the campaign trail—to uphold the United States’ domestic and international legal obligation to asylum, to end privatized detention, and to disentangle federal immigration enforcement from local law enforcement—are being shredded before our eyes.

The Trump Administration attempted to close the southern border to those fleeing persecution. It instituted a policy of summary expulsions and ignored or violated the right to seek asylum under United States and international law. Instead of disavowing those policies and that approach, your Administration is aggressively defending the expulsion policy in court, even after a federal district court ruled it unlawful. Responsibility for the suffering and deaths resulting from summary expulsions and removals now falls squarely on your Administration and will be part of your enduring legacy.

Your Administration has committed to advancing racial equity in all parts of government. This commitment is belied by the Department of Homeland Security’s actions on the southern border, where mass deportation and expulsion flights are returning Haitian migrants, without even a screening for asylum eligibility, to a country reeling from a devastating earthquake and presidential assassination. As recently as May, your Administration recognized the “political crisis and human rights abuses” that render returns to Haiti unsafe. These flights confirm our fears that your Administration, like its predecessors, is utilizing harsh and illegal policies to attempt to deter people, particularly Black migrants, from seeking refuge at the border. Your Administration has promised to uphold tenets of racial equity, but is unleashing immigration policies infused with anti-Black racism.

Your Administration continues to put incarceration at the center of its approach to immigration processing and management. Private prison companies losing contracts with the Bureau of Prisons or U.S. Marshals Service see Immigration and Customs Enforcement (ICE) as an eager contracting partner. Those detained in ICE’s sprawling web of jails and prisons endure sexual abuse, homophobic and transphobic abuse and harassment, and medical negligence. Their detention is motivated by financial incentives and political calculations, rather than any legitimate or evidence-based purpose.

We continue to present your Administration with our recommendations for policies that reimagine the current immigration system. Your Administration must restore asylum access at ports of entry, rescind the Centers for Disease Control and Prevention’s expulsion order, and issue a new termination memo for the Migrant Protection Protocols. Deportation flights to Haiti must stop, and those seeking safety at our borders must be granted their legally assured chance to seek asylum. Your Administration must end its reliance on incarceration for immigration processing, and instead commit to working with community-based legal and social service providers. At the highest levels of government, policymaking and rhetoric must reject false narratives of public safety and public health that demonize immigrants. Your Administration stands at a precipice. We urge you to choose human rights over political demagoguery and fear. 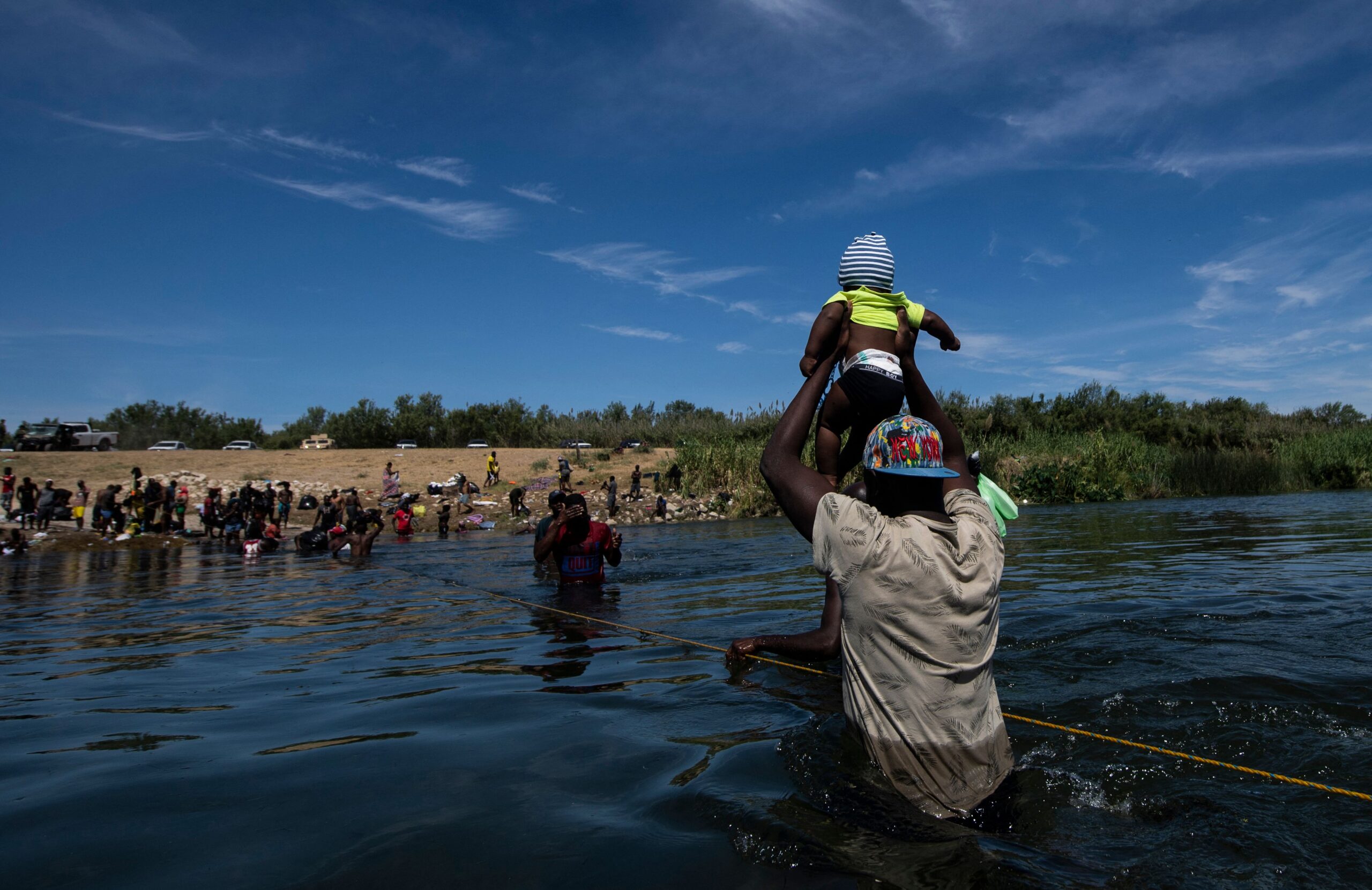 Haitian migrants cross the Rio Grande river to get food and water in Mexico, as seen from Ciudad Acuna, Coahuila state, Mexico on September 22, 2021. - Mexican President Andres Manuel Lopez Obrador urged the United States on Wednesday to act quickly to tackle the causes of the migrant crisis affecting the two neighboring countries. "Enough talking, it's time to act," Lopez Obrador told reporters as thousands of Haitian and other migrants massed on Mexico's northern border seeking access into the United States. (Photo by PEDRO PARDO / AFP) (Photo by PEDRO PARDO/AFP via Getty Images)