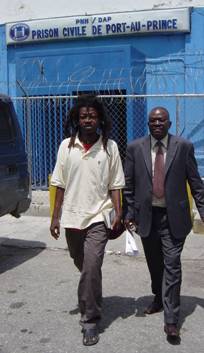 Update: Once again we have some good news- another political prisoner, Frantz Gue, a supporter of the Parti Popile Nasyonal (National Popular Party) and art student, was released today. He was arrested on August 11, 2005, illegally without a warrant, and charged with several murders and kidnappings. After ten months of difficult detention, the judge found that there never had been any credible evidence against Mr. Gue, and dismissed the case (Mr. Gue is pictured leaving the prison with his lawyer, Mario Joseph of the Bureau des Avocats Internationaux).

No good news on the remaining political prisoners, yet.

Upcoming Event: Fondasyon 30 Septanm in Haiti has announced that the �The 3rd Edition of the Solidarity Encounter with the Haitian People� will take place on August 20-26, 2006, in Port-au-Prince, Haiti. Save the date, we will post more details as they become available.

This week�s action: Last week U.S. Rep. Maxine Waters and several co-sponsors from both sides of the aisle introduced a bill in the U.S. House of Representatives calling for the cancellation of Haiti�s debt. The Jubilee USA Network (which includes IJDH) has decided to make debt relief for Haiti a principle focus this summer. To start, Jubilee USA has issued a call for all of us in the U.S. to contact our representatives and urge them to cancel Haiti�s debt:

In April, Haiti was added to the World Bank and IMF�s list of heavily indebted poor countries (HIPC) eligible for debt cancellation, just after new president Rene Preval was elected in February. But under the harmful economic conditions of the World Bank and IMF�s debt relief program, Haiti will not see this relief until December 2009 at the earliest�by which time the country will have paid $220 million in debt service that could have gone towards education, health care, or other social sector spending. The existing program also excludes cancellation of Inter-American Development Bank (IDB) debt which accounts for $470 million, nearly half the country�s debt to international financial institutions. H.Res. 888, which was introduced June 22nd by Representative Maxine Waters, will urge the World Bank, IMF, and IDB to immediately cancel Haiti�s debt.

Haiti�s debt is both unpayable and unjust. 45% of the country�s $1.4 billion debt was accrued under the Duvalier family dictatorship and used to finance the Duvalier�s lavish lifestyle and support their 29-year rule, notorious for human rights abuses. The Haitian people continue to pay interest on these loans of a clearly odious nature. This is money that could be used to invest in health care or education in a country where 23% of children under five are chronically malnourished and only 35% of students are able to complete primary school. From 2005-2009, Haiti, the poorest country in the Western Hemisphere, is projected to pay $220 million in debt service. To put this number in perspective, this is more than double the amount Haiti spent in FY2001 on education, health, roads, the environment, and water and urban infrastructure combined. Immediate cancellation of Haiti�s debt would allow the country to stop paying interest on odious debts and free up much needed resources for the country to invest in health and education.