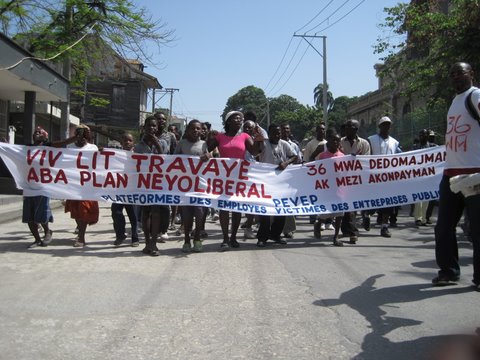 If day 1 could be summed up in the word ‘inspiring,’ for day 2, I would use the word ‘infuriating.’

I awoke at 5am to the sound of the roaming neighborhood rooster. To be fair, I was looking for an excuse to get up off the concrete anyway.

I spent the morning at a rally for May Day, or International Workers’ Rights Day. At least 100 people gathered together and marched through the streets chanting things like “Leave Preval”, “Preval is a Thief.” Many workers were laid off earlier this year when the Haitian government privatized Teleco, Haiti’s public telephone company. I lost the group when I was stopped by a Dominican reporter. He asked what people needed most. I said everything, but beyond basic provisions women need protection and the system needs accountability to prevent the next disaster. Well, at least that is what I meant to say. The interview was in Spanish after all.

I came back to the BAI to find one of the women’s groups, KOFAVIV (Commission of Women Victims for Victims) conducting another training on children’s rights. One of the leaders summoned me to the side. A young girl, only 15, had been gang raped. 5 men. One of KOFAVIV’s ajan (agents) had brought her to the meeting. These women are amazing, they live in the tent camps and provide services for other victims, many of them are survivors of rape themselves, few of them eat more than 1 meal a day, if that.

We asked her why she came with the ajan. She said she had pain in her abdomen and wanted to see a doctor. It had been one week and she had received no care nor told anyone else about the incident. She is living in one of the camps with a friend, her parents live in the countryside.

I called through the list of phone numbers provided on the card produced by the UN agencies working on these issues. No response. It’s a holiday, I’m told. We even spoke with the Director of the Concertacion Nationale (a national coalition coordinating a response to violence against women). When we told the Director the rape occurred 7 days ago, urgency faded. She said we could not get a medical certificate anymore and we should just wait until Monday. This is not the case, neither legally nor medically. The girl has some scars on her face and chest from where she had been beaten during the attack, and although no DNA at this point even if the facilities were available, we wanted to preserve at least this evidence and make sure she was given drugs to prevent infection.

BAI’s managing attorney arrived and we tracked down a Program Director at Partners in Health who told us to come to the General Hospital (now run by PIH). We waited at the hospital for over two hours. We were then led to a dirty cot in the corner of an open room with a man on a cot about 5 feet away. Tears welled in my eyes. There was no way I was letting an exam take place like this. The PIH doctor offered us her bedroom (well really just a cot in a private room in a private area). Our midwife, who joined our delegation from NY, ended up performing the exam. The other doctors were happy to give up the responsibility. I doubt any of them had slept in days.

The girl is sleeping in a tent outside our office. Showered and fed. There was also no way I was going to allow her to navigate her way back into the tent camp where she came from, the same place where she had been raped, alone, after dark. Tomorrow she has to start the grueling process of taking HIV prophylaxis.

It took 2 attorneys, 2 grassroots women’s leaders and a midwife to track down, at best mediocre care. PIH could not have been more considerate or accommodating. Although we were able to work together to make today better for one person, there are so many more just like her. We are going to be working with PIH, KOFAVIV and others in the coming weeks to develop a comprehensive approach to providing specialized services to victims of sexual violence (hopefully in concert with government agencies). Thanks for all of your support this far, we will certainly need it going forward.