The Real Disaster in Haiti is Happening Right Now 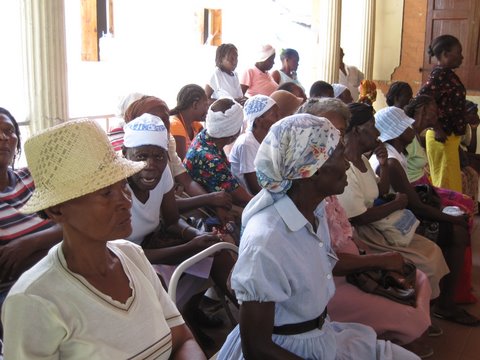 The real disaster in Haiti is happening right now, as hundreds of thousands of Haitians continue to live without food, water or safe shelter.

The people in displacement camps we spoke with thought that the Haitian Government was blocking food aid in order to starve them to death. A leader in a camp a block from the crushed National Palace said that people in his community are lucky if they eat one meal a week, which is usually on Sundays. Eating was the biggest concern for many people we spoke with.

Safety was the biggest concern for most of the women, as violent rapes are on the rise. The victims are of all ages and often gang raped. The youngest rape victim we interviewed was 5 years old. Her mother had been raped in 2004 when mass violence erupted after Aristide was deposed by the international community. This little girl before us had been the product of that rape. Her grandmother had also been raped during that time.

Housing is also at the forefront of people’s concerns. When it rains hard, which has been every night since I arrived on Thursday, people have to stand as the water floods their tents and turns their beds into mud.

My colleague down here with me, Kathy Bergin from the disaster law organization You.Me.We., said that it feels like we are watching people slowly die. We read the UN Guiding Principles on Internal Displacement and the corresponding human rights laws. We strategized on holding the international community and Haitian Government accountable to national and international human rights standards as they spend the $11 billion of promised funds, so that poor people don’t starve to death in the camps. But right now we are overwhelmed by injustice and the lack of legal remedies to address this human rights disaster.

To support our work, consider making a tax-deductible donation here.