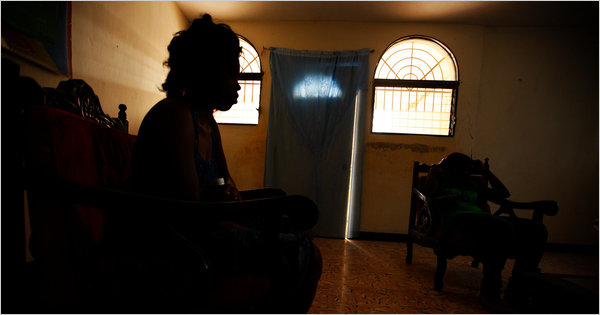 PORT-AU-PRINCE, Haiti — The 22-year-old woman, wearing a gauzy blue dress that she had changed into after her release, spoke in a whispery voice.

Perhaps the worst part of the whole ordeal, she said, was the place where her kidnappers had chosen to imprison her. That they abducted her was terrifying. That they raped her, repeatedly, was too horrendous to absorb just yet.

But stashing her in the ruins of a home? Making her crawl on her stomach beneath a collapsed slab into a destroyed house where they hid her in a pocket of rubble? That was torture, she said.

“Since I had not slept under any roof since the earthquake, I was so scared I could not breathe,” said the woman, Rose, who requested that her full name be withheld.

Rose’s kidnappers told her brother-in-law, who delivered the ransom of about $2,000, that they would kill her if she talked. She had no intention of doing so. But police investigators showed up at the family house in the Delmas 33 neighborhood shortly after her release, and a reporter from The New York Times happened upon the scene, later accompanying Rose to a women’s health clinic at the family’s request.

Being present when Rose and her family were grappling with the horror of her ordeal offered a firsthand glimpse inside the vulnerability that many Haitians, and particularly women, feel right now. Sleeping in camps, on the street and in yards, many feel themselves at the mercy not only of the elements but of those who prey on others’ misery.

So many cases of rape go unrecorded here that statistics tell only a piece of the story. But existing numbers, from the police or women’s groups, indicate that violence against women has escalated in the months after the Jan. 12 earthquake. Kidnappings are rare, but they, too, have increased, and “the threat is constant,” said Antoine Lerbours, a spokesman for the Haitian National Police.

Malya Villard, director of Kofaviv, a grass-roots organization that supports rape victims, said that the presence of thousands of prisoners who escaped during the earthquake aggravated an environment where insecurity and despair feed on each other.

“It’s an ideal climate for rape,” she said.

Ms. Villard said that Kofaviv’s two dozen case workers, in Port-au-Prince, had counseled 264 victims since the earthquake, triple the number in an equivalent period last year. Arrests for rape are fewer — 169 countrywide through May, but more arrests have been made in the last few months than during the same period last year.

Since the earthquake, international relief groups have expressed concerns about violence against women, especially in the camps under their watch. Poor or nonexistent lighting, unlockable latrines, adjacent men’s and women’s showers and inadequate police protection have all been problems.

Recently, security in eight big camps has improved, with joint Haitian-United Nations police posts or patrols; about 100 Bangladeshi policewomen arrived late last month to deal with gender-based violence at three of them. But there are about 1,200 encampments throughout Haiti, and this city’s battered neighborhoods are largely left to their own defenses, too.

Rose and her relatives recently moved back to their properties when the owner of the property where they were squatting threatened the tent city residents with eviction. Their homes have been marked with a yellow stamp by surveyors, meaning they are damaged but fixable. Rose and her relatives sleep outside them, fitfully. They were scared of the “young thugs in Mafia sunglasses,” Rose’s cousin said, even before Rose’s abduction.

On May 10, Rose, a statuesque woman who is learning to be a beautician, went out to buy some cookies. A police officer whom she knew beckoned her to sit in his unmarked car, she said. She did. Then two men ordered the officer out of the car, taking his gun and driving off with Rose.

The men shoved her into the back, and made her lie face down. She does not know what neighborhood they took her to; it was empty and rubble-filled, and had many destroyed houses. When she protested entering one, they slapped her, she said, and forced her to squeeze through the collapsed entrance. They pushed her into a crawl space beneath a fallen ceiling.

“I was scared mute,” she said. “Only when they raped me did I scream. It hurt.”

Clutching her pelvis as she talked, Rose said that the men had taken turns, raping her seven times. “Or maybe eight,” she said, shutting her eyes.

The police officer showed up at Rose’s house the morning after she was kidnapped to tell the family what had happened. “He waited all night while we lay awake terrified,” her brother-in-law said. “He was looking for his car. We said, ‘What about Rose?’ He said, ‘We’ll look for her, but, you know, you will hear from them first.’ ”

The kidnappers used Rose’s cellphone to call. They put it on speaker phone and hit her repeatedly so her family could listen to her cry out in pain.

Over the next few days, the family managed to raise $2,000 in gourdes, the Haitian currency, from neighbors. The money was left at a drop site on Sunday evening. At 3 a.m. Monday, Rose was blindfolded and put on the back of a mototaxi. When she arrived home, she collapsed into a fetal position at the door to her house and knocked weakly.

Several hours later, the police investigators arrived. Family members encircled Rose as she answered questions in a monotone. Occasionally they peered out at the street through the cracks in their home, fearful that the kidnappers were watching.

Rose had already changed her clothes and bathed, which she did not know would frustrate the collection of evidence. But the police did not raise the issue, anyway, her family said.

When the police left, Rose rode in the back of a car to a Doctors Without Borders clinic, wincing in pain as it bumped over rutted roads. At the tented clinic, she was instructed to take a seat on a bench. Another woman, slim and poised, entered the open-air waiting room and told a nurse she needed to see a gynecologist.

“Infection?” the nurse asked. “A case of rape,” the young woman answered, in clipped French. She had been invited to a “literary circle” in a tent city the previous evening, she said. “No books were discussed,” she said. The two victims sat side by side and stared straight ahead. The nurse said that the clinic had treated about 60 victims in May.

When Rose was called into an examining tent, she stumbled, woozy from hunger. The nurse gave her a couple of packages of crackers. Rose said, “I don’t have any money for those.” The nurse told her they were free. Rose offered one of the packages to a Times reporter, who declined and left her to be examined privately.

Rose was discharged with an armful of condoms and pill boxes: antibiotics for sexually transmitted diseases, anti-H.I.V. treatment, pills for vaginitis and over-the-counter painkillers.

As she emerged, her uncle — whom Rose calls Papa — watched her from a distance, tears streaming down his face.

“Beautiful child, oh beautiful child,” he said. “Look into my eyes and you will know how I feel. When is this all going to end? Haven’t we suffered enough?”