A System Put to the Test

Despite the odds, 2012 was a good year for the prosecution of rape in Haiti. The Haitian justice system has historically struggled to effectively prosecute rape cases, but as human rights lawyer Meena Jagannath has noted, rape cases were 28% of all cases for last summer’s criminal trial sessions in Port-au-Prince. Meena describes how grassroots women’s activists and women lawyers used the trials as an opportunity for public education about rape and to effect balance in the typically male-dominated courtroom atmosphere.  Haitian lawyers with the Rape Accountability and Prevention Project (RAPP) at the Bureau des Avocats Internationaux (BAI) brought seven cases to trial in 2012, all resulting in convictions and significant jail time. The prosecution of a Haitian official this week for rape was both troubling and encouraging. 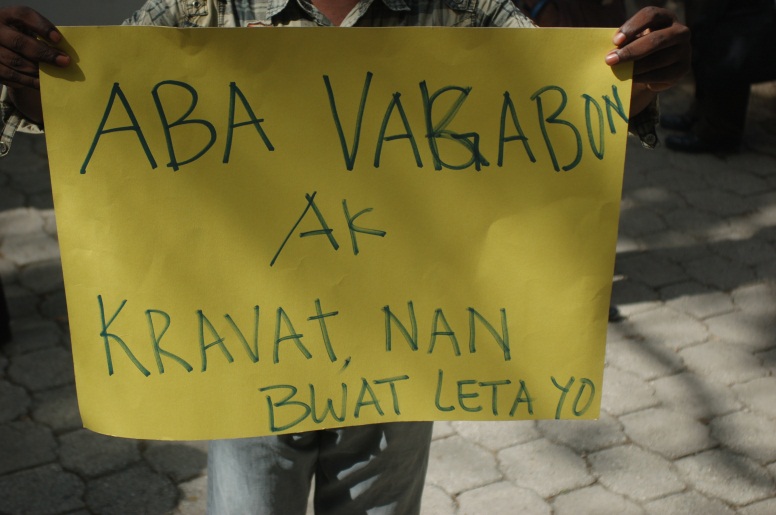 These advances in enforcing the rights of victims of gender-based violence faced a test as 2012 came to a close, when one of Haiti’s most powerful officials–Josué Pierre-Louis—was charged with rape against Marie-Danielle Bernardin. Mr. Pierre-Louis is one of Haiti’s most powerful and experienced officials. He is currently the President of the national Electoral Council, after having served as the Minister of Justice, General Director of the Ministry of Justice, Chief Prosecutor of the Port-au-Prince trial and appeals courts and Academic Director of the Magistrate’s Academy. He is also a high-profile counselor to President Michel Martelly. Ms. Bernardin was, until she made the rape accusations in November, employed by the Ministry of the Interior as assistant to Pierre-Louis at the Electoral Council.

I have collaborated with Josué several times over the past dozen years, on the Raboteau Massacre trial and the case against Jean-Claude Duvalier, among others.  On a personal level, I was sad to see him involved in this incident. But Ms. Bernardin’s accusations are credible, so on a professional level I am eager to see Haiti’s justice system pursue them fairly and aggressively.

Pierre-Louis categorically denies the accusations. People believed to be his supporters have posted nude photos of a woman on the internet. Mr. Pierre-Louis’s lawyer has told the press that the photos depict Ms. Bernardin, and show that she and Pierre-Louis had a relationship that would imply consent. Ms. Bernardin denies the relationship. She is clearly not the person in the photo. Even if she were, under Haitian law, as in the U.S., consent must be established for each and every instance of sexual conduct, and a prior relationship is not insufficient. Mr. Pierre-Louis has also filed a criminal complaint against her for “espionage.” He claims that he caught Ms. Bernardin looking through files on is computer and phone.

The current Minister of Justice, Jean-Renel Sanon, responded by visiting the Investigating Judge then on the case, Joseph Jeudilien Fanfan, the morning of a pre-trial hearing. We do not know what was discussed, but the visit itself was highly improper. In seventeen years of working on human rights in Haiti, I have never heard of a Minister of Justice visiting a judge in his office for any reason, nor had any of the Haitian lawyers I asked today. Judge Fanfan reported that Pierre-Louis’s half-brother, Ikenson Edume, who is also a judge, threatened him after he prohibited Pierre-Louis from traveling, in front of many other judges in December. Judge Edume was not punished for the threats, and was at work in the courthouse today. 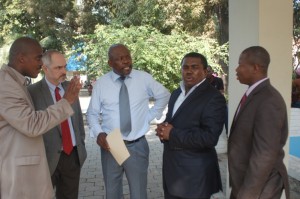 Judge Fanfan lifted the travel prohibition, then excused himself from the case. He was replaced by Judge, Merlan Berlabre. Both judges refused calls from Ms. Bernardin’s supporters, including some of the best-known human rights and women’s groups in Haiti, to impose other restrictions on Pierre-Louis’s freedom (most rape defendants in Haiti are held without bail. That practice is also problematic, but demonstrates Mr. Pierre-Louis’ preferential treatment).

Today was supposed to be the day for Pierre-Louis to give his version of the events. Judge Berlabre had scheduled a “confrontation”, a pretrial hearing where the accuser repeats her accusation with the defendant present, and the defendant responds.

I went to the courthouse with Ms. Bernardin’s legal team, three human rights lawyers, to observe the confrontation. The lawyers were happy to see several supporters of Ms. Bernardin—from grassroots, women’s and human rights groups—as we approached the gate to the court complex. But the lawyers were also nervous. They were nervous for their client, because of all the political pressure in the case. They were also nervous for themselves. Even before they took the Bernardin case, all three faced enough harassment from the government and anonymous death threats for the Inter-American Commission on Human Rights to have issued a “Precautionary Measures” order for their protection in November.

The lawyers were planning to start the hearing by requesting Judge Berlabre to recuse himself from the case, because they felt that it would be hard for the judge to provide a fair hearing. They noted that Judge Berlabre and Mr. Pierre-Antoine were from the same provincial city, that the Judge had been Pierre-Louis’s student at the Judicial Academy, and that they had information that Pierre-Louis had been instrumental in Judge Berlabre’s nomination to the bench. Judge Berlabre is a respected judge, but those factors, combined with Pierre-Louis’s immense influence from his impressive career in the justice system, his Presidential connections, the Minister of Justice’s visit to the Judge, the system’s failure to punish Pierre-Louis’s brother for his threats, and Judge Berlabre’s refusal to impose any restrictions on Josué, seemed to provide a strong case for recusal.

I joined the lawyers huddled in a hallway around the corner from the courtroom, putting the final touches on their strategy. Suddenly, a chant broke out “Jistis pou Josué”, followed by signs of commotion. I followed the noise around the corner, and saw a bunch of agitated men- maybe a dozen- in the hallway outside the open door to a room, clenched fists and signs in the air, supporting Pierre-Louis and angrily denouncing his prosecution. I learned later that the room they were shouting into was the room for our hearing, and that Pierre-Louis and Ms. Bernardin  were inside, with Judge Berlabre. At least twenty reporters were present for the hearing, and they quickly filed into the hallway with cameras, recorders and notebooks. The police did not match the reporters’ speed: it took at least fifteen minutes for a handful of officers to arrive, and another ten for the more heavily armed riot police. Haiti’s police response times are justifiably hampered by understaffing and resource constraints, but this was an important hearing at the country’s largest courthouse—there should have been a greater police presence

After a few minutes the human rights groups started a counter chant. They had better signs- my favorite was “Down With Necktied Vagabonds in Government Offices”, but were smaller and less loud. Eventually the police did come, and cleared the hallway gradually, without further incident. 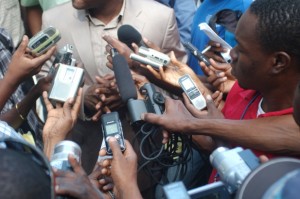 All this was highly unusual. In Haiti, as elsewhere, courts take security and decorum very seriously. I have observed many high-profile, controversial trials there, and have yet to see a single person allowed to wander the halls with a sign, never mind two large groups. Police typically move quickly to nip any disruptive activity in the bud, and set an example.

The lawyers, meanwhile, headed outside, where they and the human rights activists were outraged and shaken (one of the lawyers left his coat with Ms. Bernardin to hide her face from the cameras). They accused Josue of organizing the protest–he was reportedly in the courtroom, and certainly did not try to stop it—in order to intimidate Ms. Bernardin. They accused the police and the courts of letting this disruption go on long enough to send a message- a very chilling one—to Ms. Bernardin, her lawyers and supporters, and anyone who would try to use the justice system against powerful men in Haiti.

The action inside the courthouse was dispiriting, but there was cause for hope outside. After recording the protest and counterprotest in the hallways, the reporters streamed out the building and attended a series of impromptu press conferences by Ms. Bernardin’s supporters and lawyers. From the journalists’ questions, they seemed to understand why Ms. Bernardin’s team was scared (journalists in Haiti complain of their own harassment) and outraged. They also seemed to relish the role of reporting on the abuse of power evident in the courtroom.

There was more cause for hope back at the Bureau des Avocats Internationaux office where one of Ms. Bernardin’s lawyers worked. Other lawyers and paralegals at the office- all women—were providing intake for four rape victims who had come to the office seeking justice. The appearance of more rape victims is disconcerting, but not new for the BAI. What is new is that there is now a solid chance that the justice system, properly pressed, will provide these victims a fair trial, and will give potential perpetrators a reason to fear punishment. The victims, their lawyers and the groups that support them are persistently and courageously building, cases by case, a justice system that can apply the rule of law even against the most powerful, even in favor of the most marginalized.

Human Rights lawyer Brian Concannon directs the Boston-based Institute for Justice & Democracy in Haiti. He has worked in Haiti for the United Nations and the Bureau des Avocats Internationaux.