A Quest for Truth in Haiti 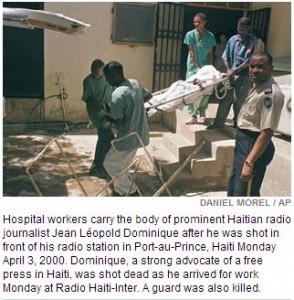 The unresolved demons in Michèle Montas’ life underscore how even the influential in Haiti can’t push the levers of a justice system that’s badly in need of reform.

Forced into exile by the Duvalier dictatorship — only to return to Haiti, and be forced out again by an assassin’s bullet — Montas today finds herself at the center of two epic legal cases winding at snail-pace through the judicial system.

In one courtroom, an investigative judge is trying to determine who ordered the assassination of her husband, agronomist-turned-famous journalist Jean Léopold Dominique and a guard in the courtyard of his Radio Haiti-Inter 13 years ago this month.

In another, a three-judge appeals panel is determining whether former President-for-Life Jean-Claude “Baby Doc” Duvalier, 61, should stand trial on human rights abuses that Montas and others say they suffered under his dictatorship from 1971 to 1986.

“What matters to me is the process,” said Montas, a former spokeswoman for U.N. Secretary General Ban Ki-moon and whose grandfathers were justices on Haiti’s supreme court. “Somewhere in me, there is that time when we had a judicial system that functioned.”

But in Haiti, where crimes routinely go unpunished, the justice system hasn’t worked in a long time. Clerks still keep records by hand, legal proceedings are held in French although most speak Creole, and, according to a recent human rights report, judges often complain of being “unable to dispense justice calmly, because of explicit threats made against them or their families.”

“There is still a long way to go before the justice system is working as it should be,” said the report’s author, Michel Forst, the ex-UN Independent Expert on the Situation of Human Rights in Haiti.

Still, Montas, a former radio journalist, pushes forward in her quest for answers.

“In the case of Jean, I hope things will come out. The truth is probably the first step toward rule of law. I just want the truth,” she said. “In the case of Duvalier, what I want is for people to hear what happened. It’s not about a dictator who is old and sick. It’s about what impact he has had on the country.

“We are still paying the price for 30 years of dictatorship and many people don’t realize it,” she said.

On Thursday, after a two-week hiatus and a power outage inside the sauna-like courtroom, Duvalier’s appeals hearing resumed with testimony from Henri Faustin, who was imprisoned for more than a year as a student.

Duvalier wants the court to dismiss an investigative judge’s order that he stand trial on corruption charges. Montas and 29 others, including Faustin, are seeking to have crimes against humanity charges reinstated. The judge rejected those charges last year.

The case has divided Haitians with some suggesting to Montas that both Dominique and Duvalier are old stories that should be left in Haiti’s tragic past.

“Impunity, for me, is not just a question of assassination. It’s about everything in Haiti. It’s about our future,” said Montas, 66. “What does that mean when we cannot even try a guy who has taken $600 million out of Haiti’s’ coffers? That is what Duvalier did.”

On Feb. 28, after refusing three previous requests by the court to appear, Duvalier finally faced his accusers — except for Montas.

She was 1,500 miles away in New York where she has lived since leaving Haiti 22 months ago after stepping down as special adviser to the head of the U.N. peacekeeping mission.

From her New York city high rise, where she’s surrounded by Haitian paintings and a portrait of Dominique, she keeps tabs on the legal wrangling. She adds the latest developments in Dominique’s case to a 38-page chronology that includes names of those implicated, summoned to give testimony and killed.

The case is currently in the hands of its tenth investigative judge, not counting those who outright refused to handle it when it landed on their desk. The current judge, Yvickel Dabresil, is tasked with determining “the intellectual author” of the hit. Quietly, Montas, however, fears that he, too, will do as his predecessors: quit under pressure or out of fear for his own safety.

“Almost everyone who has touched this case is dead,” she said.

On Christmas Day 2002, while at home in Petionville, Montas almost joined the list herself when two unidentified gunmen fired shots at her, killing bodyguard Maxime Sëide. The bullet holes remain in her gate. When she most recently lived in Haiti, she traveled with six U.N. bodyguards and two armored cars.

“Why did they come and shoot at me? Because I was asking for justice everyday on the microphone?” she said. Two months later, fearing more deaths, she shut down the radio station, and again fled into self-exile.

In 2001, Gassant told The Miami Herald that he feared for his life because powerful people in then-President Jean-Bertrand Aristide’s government might be implicated in the murders. Once a supporter of Aristide’ and his Lavalas Family party, Dominique had become an outspoken critic on the airwaves.

Gassant declined to discuss last month’s meeting with the judge. Préval, who was a good friend of Dominique’s, told The Herald, “It’s natural that the judge would want to talk to me.”

Some have suggested that Montas seek justice in an international court. That remains an option for Duvalier, she said.

She accuses Duvalier of “destroying hope” when on Nov. 28, 1980 his regime arrested her and several other journalists and imprisoned them in a 5-by-8 cell on the grounds of the presidential palace before shipping them into exile.

But she said there will be no international tribunal in the case of Dominique, whose decades-long struggle for democracy and championing of poor farmers was captured on the big screen by filmmaker Jonathan Demme in the documentary The Agronomist. His death on the eve of legislative elections in Haiti was declared by the Organization of American States “an attack on freedom of the press as well as democracy.’’

“I want him to find justice in his own country because that is what he would have wanted. So many people have died since ‘86,” Montas said. “I told myself that if we can use this case to push the issue of impunity to the outmost, then we should do it.”

“No one is going to give me Jean back. I know that,’’ she said. “But what’s essential for me is that people see him for what he represented.”