Jobs and Justice: Raising the Floor on Worker Rights and Wages in Haiti 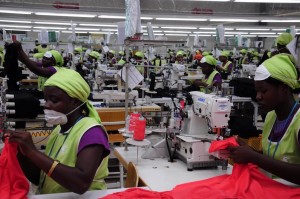 Over the past few weeks in this article series, we’ve heard firsthand from Haitian garment workers about low wages, sexual abuse, labor rights violations, and work-related injuries they suffered in sweatshops.

Meanwhile, the world has watched the death toll in last month’s factory collapse in Bangladesh creep to above 1,100. Global activists have joined the calls of protesting workers, ramping up pressure on clothing retailers against the regular mistreatment and deaths of workers. Slowly, the public is realizing that exploitation within the garment assembly industry is not the exception, it’s the rule. Today, we take a deep dive into the economics of this sector in Haiti to look at how it has come to be, and at what alternative pathways might look like.

In discussions among foreigners about working conditions and wages in the assembly industry, we often hear, “But Haitians need jobs. Wouldn’t things be worse without them?”

The question creates a false choice between no job and a grinding, exploitative job. Looking at the factors that led to low factory wages in the first place helps expose the myth. Western governments and their international financial institution (IFI) partners have played an active role in creating the dearth of options that exists for Haitian workers. For example, trade policies from the 1980s onward caused the decimation of the Haitian agricultural sector. Out-of-work farmers fled on masse to cities, and many had no better option but a factory job. Foreign policies imposed on the Haitian government have also contributed to a near-complete lack of public services and a weak, dependent domestic economy, which ramp up desperation; desperation, in turn, forced workers to accept the low wages.

The offshore assembly model creates a race to the bottom. In it, businesses circle the globe seeking the lowest cost of production – which involves the lowest health and safety standards and suppressed union organizing. As factories move to the next country, they create dirt-poor workers.

Despite this, governments, the UN, and the IFIs tout the garment assembly industry as a path to development in global South countries. The UN places the expansion of free trade zones (groupings of export-producing factories that enjoy tax exemptions and fewer safety, health, and environment regulations) toward the center of its development road map for Haiti. A 2009 report it commissioned argued that Haiti’s duty-free, quota-free preferential access to the American market, combined with low labor costs and a lack of protectionist policies, makes the country “the world’s safest production location for garments.” Weeks after the earthquake, that paper’s author, Oxford University economics professor Paul Collier, likened the catastrophic moment to 19th Century development of the US West, with its “investment booms, financed by enthusiastic outsiders. The earthquake could usher in such a boom in Haiti.”

Apparently sharing this view, four months after the earthquake the US Congress extended US trade preferences for assembled garments to Haiti in a law that was portrayed as a relief measure. Also since the earthquake, the US and other global players came up with $224 million to subsidize the development of a new free trade zone in northern Haiti, Caracol. Developers, who displaced 366 farmers from arable farmland for the project, promised more than 20,000 jobs. In actuality, fewer than 1,500 people are employed in the park; and after paying for transportation and meals, workers reportedly end each day with an average of US $1.36. More free-trade zones are in the offing.

For all the funding and attention the sector has received, the 24 factories currently making garments for export to the US employ very few people: 25,924, or approximately 0.5% of the working-age population. No matter the numbers, the industry’s contribution to the national economy is false development, said economist Camille Chalmers with the Platform to Advocate Alternative Development in Haiti. “Almost all of the primary materials used in manufacturing come from outside. When they say that Haiti exports hundreds of millions of dollars in products, a lot of that goes to [foreign companies to] pay for the inputs like cloth and equipment. Once assembled, the goods aren’t consumed in Haiti but are shipped abroad. The government doesn’t even benefit from taxes or tariffs. Haiti’s only role is as a stopover in the production process, where cheap labor keeps profit margins high.”

Haiti does need work opportunities, as any cash-desperate person there will tell you. But not at any price or under any conditions. Former factory worker Ghislene Deloné said, “It can’t be based on the exploitation of people. We need to be treated like human beings.” And Camille Chalmers said, “When we speak of employment, we have to talk about the quality of employment. [This sector] doesn’t create work that can develop our human resources or reduce poverty. These comparative advantages just reproduce misery.”

A better question than “Wouldn’t no job be worse?” is how to ensure good, dignified jobs, based on the requirements outlined by workers and as mandated by the International Labour Organisation. Here is where we come in. We can support alternative sources of employment that provide more power and economic advantage to workers, their families, and the domestic economy, like worker-owned businesses, cooperatives, fair trade enterprises, and smallholder agricultural production.

We can also help stop the race to the bottom so that all workers can support their families and live with dignity. There is no reason to consent to a system wherein both the maker and the wearer of a product are degraded. We can work to ensure that the current model is more humane, by pressuring our governments and the IFIs to make enforceable labor rights and living wages standard policy in all trade agreements and so-called development programs.

We can, moreover, engage in the campaigns driven by affected workers, like boycotts against corporations with bad records. University campuses around the country have succeeded with this tack on apparel made by Nike, Russell Athletics, Reebok, and others.

It is often still the case that, when pressured, companies just close their doors and relocate to another country. This doesn’t mean that we should stop campaigning, but rather that we should redouble our efforts to raise the floor everywhere. Instead of allowing unlivable wages and violation of labor rights to be cast as a comparative advantage, we should accept nothing less than jobs with justice for all.

To get involved, check out the websites of United Students against Sweatshops, Witness for Peace, Worker Rights Consortium, Institute for Global Labour and Human Rights, and Corporate Action Network.

Stay tuned for Beverly Bell’s new book, Fault Lines: Views across Haiti’s Divide, coming out in June from Cornell University Press. Read more from Other Worlds here, and follow us on Facebook and Twitter!

Beverly Bell has worked for more than three decades as an advocate, organizer, and writer in collaboration with social movements in Latin America, the Caribbean, Africa, and the U.S. Her focus areas are just economies, democratic participation, and gender justice. Beverly currently serves as associate fellow at the Institute for Policy Studies and coordinator of Other Worlds. She is author of Walking on Fire: Haitian Women Stories of Survival and Resistance and of the forthcoming Fault Lines: Views Across Haiti’s Divide.

Copyleft Beverly Bell. You may reprint this article in whole or in part.  Please credit any text or original research you use to Beverly Bell, Other Worlds.