A new lawsuit has been filed in Federal Court in Brooklyn, NY against the United Nations. The class-action lawsuit claims the UN waived immunity in 2004 when establishing the UN Stabilization Mission in Haiti. This filing comes just a few days after the United States government confirmed its support of the UN’s immunity in a lawsuit filed by BAI, IJDH, and KKWTP on behalf of five named plaintiffs. 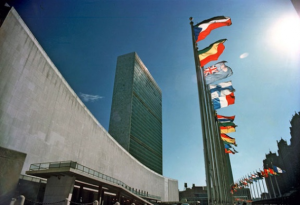 A new lawsuit filed Tuesday in Federal court in Brooklyn seeks compensation from the United Nations for its alleged role in bringing cholera to Haiti.

The lawsuit comes after the United States government wrote a letter last week charging that the United Nations has absolute immunity from suit under the UN Charter and the Vienna Convention. The letter said the UN had not “waived” immunity.

The new suit alleges that the UN, in fact, waived immunity in the 2004 agreement establishing the UN Stabilization Mission in Haiti (MINUSTAH).

The suit pointed to a provision in the 2004 agreement addressing third-party claims for personal injury, illness or death “arising from or directly attributed to” MINUSTAH, which provided for compensation from the UN.

“With all respect to the US government, anyone who thinks UN immunity is settled law in a case like this is sorely mistaken,” said Dr Tim Howard, one of the lead attorneys in the suit. “Under both the UN convention and US statutes, immunity expressly waived cannot be unwaived. And the United Nations clearly and expressly waived its immunity from liability long before it caused this disaster.”

Cholera in Haiti has led to the deaths of more than 8,000 people in the country, an epidemic that continues today.

“The public perception is that the UN is immune from legal action for its breaches of international legal standards,” Dr Howard said. “The public perception is wrong. This will be a highly public battle, but we’re confident we are going to win. The law is on our side, the facts are on our side, but most importantly, justice for human rights is on our side. The world will know the craven manner with which the UN has run away from the devastation it has caused, and the court will respond, since it is clearly within its power to do so.”