Summer Reading: Learn How BAI and IJDH Fight for Justice in Haiti 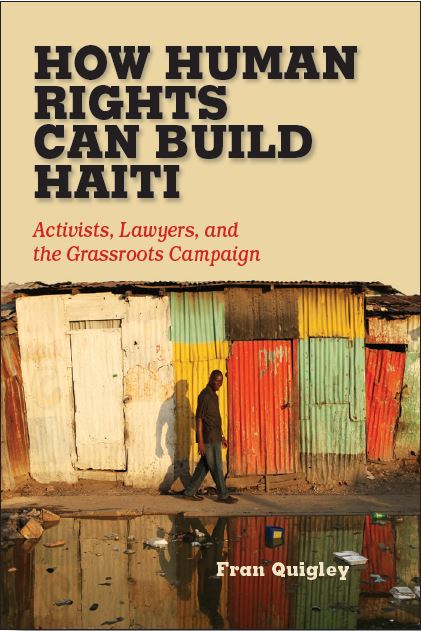 Not since Tracy Kidder’s masterful narrative of Mountains beyond Mountains have I found an author who could provide a clearer picture of Haiti and some of the people who work there. Unlike Mountains… Quigley’s well-researched book studies Haiti’s broad, systemic difficulties. Yet, like Tracy Kidder, Fran Quigley shines hope on Haiti’s future as he includes in his book, not one, but two courageous men—one American, one Haitian—and their supporters, as they apply the tools of their lawyerly trade in the pursuit of Haitian human rights.

Author Fran Quigley delves further into Haiti’s complicated problems and explains the challenges Haiti faces. He methodically constructs each chapter with interviews, facts, and observations. For those readers concerned about our poorest neighbor and its struggles with human rights abuses, the aftermath of the 2010 earthquake, and the cholera epidemic, this is a must read. If you wonder, as I have, why nearly five years after the earthquake, thousands of Haitians still live in enormous tent cities and why over 8,000 people have died from cholera, then you must read Quigley’s book. The author recounts the intense collaboration and support Brian Concannon, International Human Rights Lawyer, and his Institute for Justice and Democracy in Haiti provides to Mario Joseph and his team of lawyers at Haiti’s Bureau des Avocats Internationaux. Concannon’s and Joseph’s human rights approach provides Haitians with a real promise for justice by respecting Haiti’s constitution and demanding its enforcement.

Author Fran Quigley is a clinical professor at McKinney School of Law, Indiana University. Vanderbilt University published How Human Rights Can Build Haiti, Activists, Lawyers, and the Grassroots Campaign in 2014.

Reviewer Carol Strazer is the author of Barbed Wire and Daisies, a historical fiction novel based on WWII Germans’ true stories of ethnic persecution.