Coordination Europe-Haiti writes in support of Haiti in the wake of Hurricane Matthew’s destruction and calls for international action to assist in reconstruction.

CoEH expresses its profound solidarity with the Haitian people 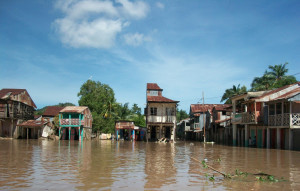 Early October, Haiti has been hit very hard by hurricane Matthew. The Coordination Europe-Haiti expresses its profound solidarity with the families of the victims. Thousands of people have lost their houses and means of living. There is considerable loss of harvests. Long-term consequences for agriculture and food security are still to be assessed. Infrastructure has been severely damaged, as well as public services in the affected areas. The inundations enhance the risk of a new cholera epidemic. To this socio-economic consequences we must add the probability of increased political instability, which already characterises the country for more than a year. The elections which were planned for 9 October, have again been postponed indefinitely.

The Coordination Europe-Haiti appeals to the international community to act with solidarity, generosity and discernment. It is necessary to draw lessons from humanitarian and development aid in the post-earthquake reconstruction process in Haiti.

The Coordination Europe-Haiti invites to respect the following principles :

–       The assessment of the current situation and the formulation of urgent needs, as well subsequent projects and programmes, should be led by Haitians themselves

–       A triple approach is needed for programmes and projects :

• Structural : in all emergency programmes a long-term development perspective must be taken into account from the start

• Rights-based : in order to strengthen government institutions, since they are the primary structures which bear the primary responsibility for the wellbeing of the Haitian population

• Focused on strengthening local civil society, which is most close to the affected communities and can act in direct solidarity

–       Not charity, but the principle of solidarity should guide international support

–       In order to be coherent, the international support should benefit to the maximum extent possible from human and material resources which are present in Haiti. For example, instead of importing food items from abroad, priority should be given to products that are available at the local market.

–       Real transparency, both towards Haiti and towards supporters abroad, is needed in the programmes and projects which are managed by international organisations in response to the disaster.

Our platform strongly appreciates the initiatives that have been taken by its members and by other actors in solidarity with Haiti. In its contacts with the European Union, an important actor in Haiti, the Coordination Europe-Haiti will insist on the principles formulated above.

On behalf of the Coordination Europe-Haiti,