The UN peacekeeping mission in Haiti, which is known by its French acronym MINUSTAH, is likely to significantly downsize its presence in Haiti in the near future. Over 2,000 soldiers from 19 contributing countries will be sent home, although the plans for foreign police officers and civilian staff remain uncertain. Some suggest that civilian staff will remain in Haiti alongside the UN police, an unprecedented move in UN peacekeeping history. 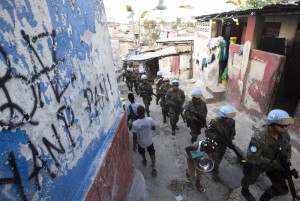 A few dozen Brazilian troops wearing the blue helmets of the U.N. military force stroll through a dense warren of shacks in Haiti’s most notorious slum, facing no greater threat than a few barking dogs along some of the same streets where pitched gunbattles between gangs and peacekeepers used to be a daily occurrence.

Years of easygoing patrols like the one on this recent afternoon in the steamy seaside district of Cite Soleil is a clear sign to many both in Haiti and around the world that it’s time to wrap up a U.N. force that has been cycling through this Caribbean country since a 2004 rebellion engulfed Haiti in violence.

“We have a secure and stable environment,” Col. Luis Antonio Ferreira Marques Ramos, deputy commander of the Brazilian peacekeeper contingent, told The Associated Press. “The important thing is to leave in a good way.”