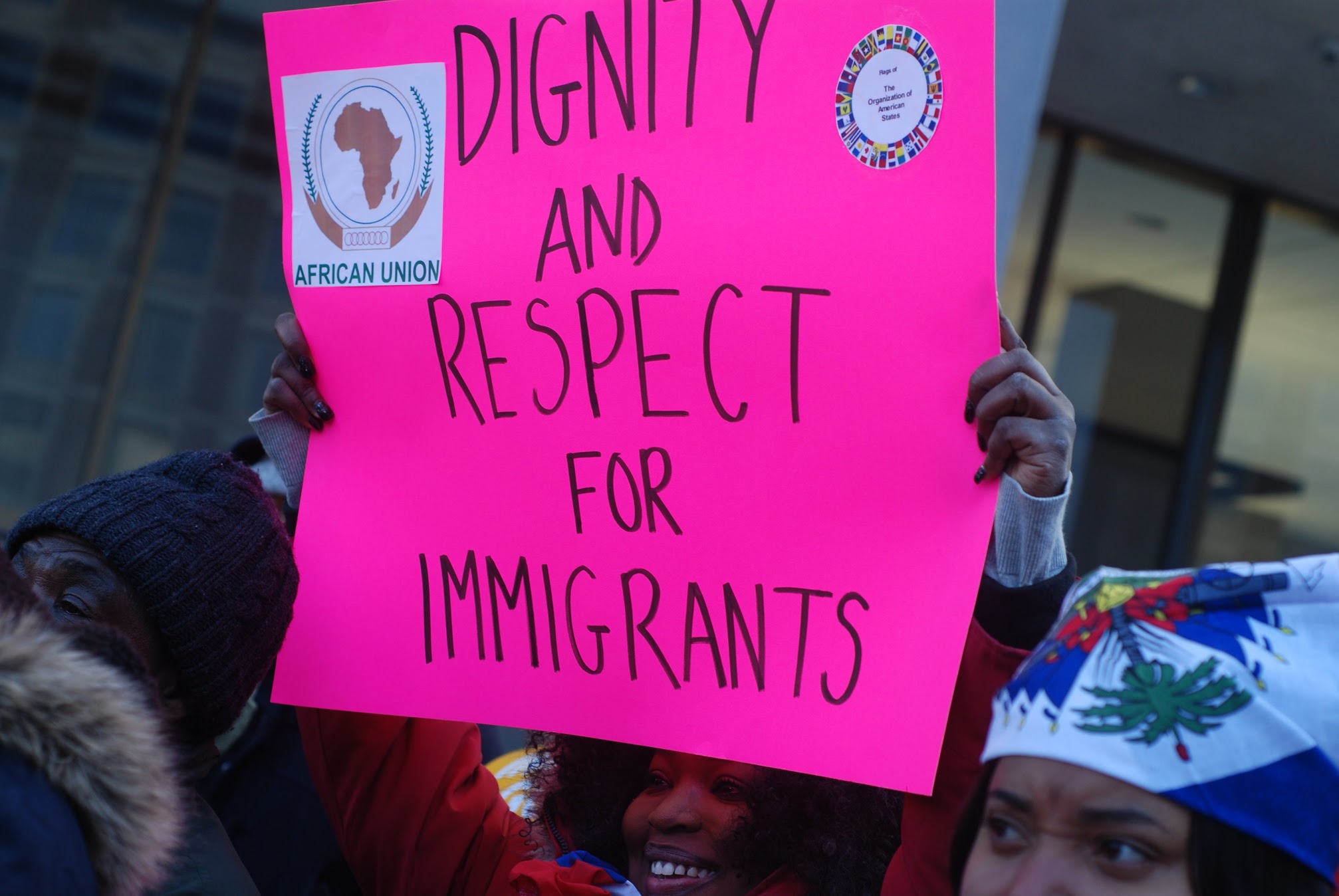 Under the umbrella of Haitian Americans United (HAU), Haitians and their allies rallied outside of Boston City Hall denouncing Trump’s disparaging comments regarding Haiti, El Salvador, and African countries. The Trump administration recently terminated Temporary Protected Status (TPS) for both Salvadorans and Haitians. Local elected officials, as well as Senator Edward Markey (D–MA), decried the Department of Homeland Security (DHS)’s last November decision and vowed to continue to fight for fair and just immigration policy that keeps families together. Read the article HERE.

Haitian-Americans waved flags from their native country and demanded dignity as they lined the steps of Boston City Hall Friday, rallying against President Trump.

Despite chilly weather, more than 100 people gathered for the rally organized by Haitian-Americans United. Around noon, the rally was opened with prayers in Haitian Creole and in English, followed by speeches from community leaders and state and local politicians.

Mayor Martin J. Walsh was not at the rally, but Alejandra St. Guillen, director of the city’s Immigrant Advancement office, spoke on his behalf.

“As Mayor Walsh has said, immigrants are the promise of America,” St. Guillen said. “Haitian-Americans in Boston and their children are an integral part of that promise. The Haitian community in Boston is brave, strong, and diligently working to achieve the American dream.”

St. Guillen called for permanent residency status for all TPS holders, including more than 1,600 Haitian-Americans living in Boston.

“Immigrants from countries all over the world are just as Bostonian as any of us,” she said.

After the speeches, protesters were directed to walk silently to the John F. Kennedy Federal Building, where federal immigration offices are located. Chants of “Dignity” and “Together we stand strong” could be heard across Government Center.

Partners in Health, an international medical group started in Haiti, also took part in the protest.

“We must stand together with our brothers and sisters from Haiti and show our support for the country and its people, who continue to teach us about dignity, justice, and the fight for human rights,” chief medical officer Dr. Joia Mukherjee said in a statement.

Gertrude Delsoin, a Haitian immigrant who lives in Dorchester, said she is disappointed by the way Trump talks about her country. But she has a different way of looking at the word he used.

“When I was a child, they used to use the thing that he said we are to make the garden grow,” Delsoin said. “It’s organic soil.”

Pierre Lafayette, 46, of Boston said the Trump comment is even worse if one considers the history of US involvement with Haiti. “The implementation of their own policy sank us down,” he said.

“To call us a shithole — they turned us into a shithole,” he said. “With the help of the US, Canada, and the French, we became the poorest country.”

Lafayette said his 15-year-old niece cried for three days after the election. He finally took her to a school counselor.

“She said she didn’t cry because it was Trump that was elected, but she was crying because people elected somebody like this,” Lafayette said.