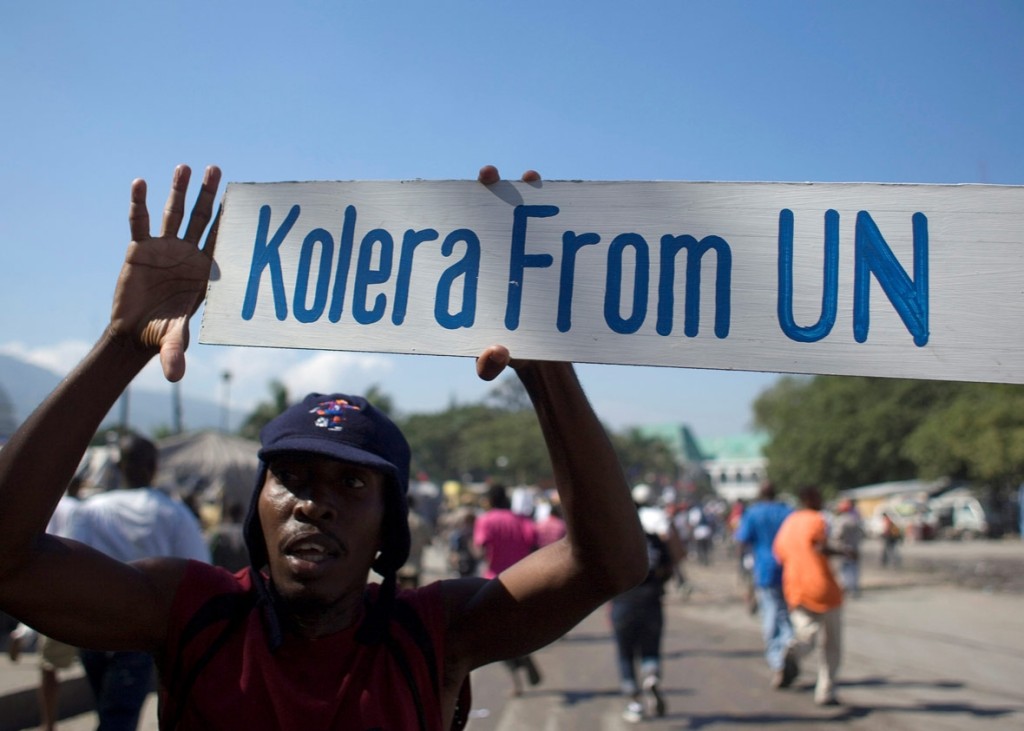 Wednesday, June 15, Boston — Human rights advocates denounced yesterday’s UN announcement that it will unilaterally replace compensation for victims of the UN-caused cholera outbreak in Haiti with “community projects,” in violation of its promise to involve victims in that decision. Since announcing a “New Approach” to cholera in Haiti last August, the UN has repeatedly pledged to place victims at the center of the process and consult with them on the elaboration of its promised material assistance package. Ten months later, without holding a single consultation session with the victims, the UN made the decision to abandon the compensation that the UN’s own human rights experts acknowledge the victims are entitled to.

“Consulting victims after the important decisions have been made is not a ‘New Approach’,” said Beatrice Lindstrom, an attorney with the Institute for Justice & Democracy in Haiti (IJDH), which has sought justice for victims through the UN’s claims process and in US courts. “It is a continuation of seven years of ignoring the rights and the dignity of the cholera victims, and all Haitians.” In October, UN Special Rapporteur on Extreme Poverty Phillip Alston characterized the UN response to date as “morally unconscionable, legally indefensible … politically self-defeating [and] entirely unnecessary.”

Yesterday’s statement was delivered by Deputy Secretary-General Amina Mohammed in a briefing to the General Assembly appealing for member state funding and reporting on the UN’s progress in implementing the New Approach. Ms. Mohammed announced that the UN proposes taking a “community approach and establish[ing] priorities for projects in consultation with victims and their families and communities.”  The statement reverses the UN’s previous position, which committed to assessing the feasibility of individual victim payments before making any decision, including through “consultations on the ground with victims and their communities.”

Cholera has killed more than 9,600 Haitians and sickened more than 800,000 since it was introduced to Haiti through reckless disposal of human waste at a UN military base. It continues to kill at the rate of one Haitian every day, and the country remains vulnerable to a new wave of infections with the return of hurricane season. Tens of thousands of already-impoverished families have had to go into debt to pay transportation, healthcare and burial costs from cholera. Children forced to leave school because of family cholera expenses are faced with generational poverty. “In focus groups, victims repeatedly explain that they need money to pay off the crippling debts that the UN’s cholera epidemic imposed on them and get their kids into school” said Brian Concannon, Jr., Esq., Executive Director of IJDH. “As a matter of decency, of common sense, and of international law, they should be compensated.”

Advocates also expressed outrage to opposition by the United States and other large donors to viable initiatives to fund the New Approach, including to a proposal presented by the Deputy Secretary-General to reallocate the $40 million left over in MINUSTAH’s budget to urgently-needed cholera control efforts. Earlier this month, the US and France reportedly blocked a UN plan to require the funds to be reallocated, leaving the Secretariat to ask governments to voluntarily waive their shares. The US stated yesterday that it would not allow its share to be used for cholera. Meanwhile, the United States has also refused to make a separate contribution to the New Approach.

“Powerful governments’ refusal to allocate even MINUSTAH’s leftovers to save lives from the cholera outbreak it caused demonstrates their lack of commitment to Haiti, to UN accountability and to the rule of law,” said Mario Joseph, Managing Attorney of the Bureau des Avocats Internationaux and Haiti’s lead lawyer for cholera victims. “Since the cholera epidemic started in 2010, these governments have found $4 billion to maintain soldiers in a country that has not had a war in anyone’s lifetime, and want to continue spending money on an unwanted peacekeeper presence, but they cannot find 1% of that amount to fight the worst cholera epidemic in modern times.”

Reallocating the unspent funds left over in MINUSTAH’s budget would serve as a stop-gap measure to address the most urgent humanitarian needs. While not a long-term solution, it would relieve the funding shortage that currently threatens to reverse progress made this year to control the epidemic.

Several other governments declared their support for reallocating the underspend, notably governments from the global south such as the CARICOM bloc, India and Senegal.