As the United Nations winds down its 13-year peacekeeping in Haiti,  the victims of cholera demand that the organization fulfills the promise it made to the Haitian people nearly a year ago. The U.N. promised to raise $400 million to fund its New Approach to cholera in Haiti which included individual compensation to the most affected families. Brian Concannon, the Executive Director of  Institute for Justice and Democracy in Haiti urged the U.N. to consult with cholera victims before making its final decision.“Moving forward with only community projects without consulting Haitians will not be accepted in Haiti and will not effectively address the harms that have been suffered by victims,” Concannon said.

Join our Time 2Deliver campaign to urge the U.N. to deliver on its promise and urge your country to contribute to the cholera fund if it has not done so already.

In a suburb a few miles south of Haiti’s capital of Port-au-Prince, Vilner Benjamin walks through a concrete maze of unpainted cinder block homes and narrow alleys pointing out the filthy, standing water and the canal that floods with disease-carrying waste whenever it rains.

His cell phone rings nonstop as he makes his way through the neighborhood called Bergamoth, with caller after caller anxiously asking the same question: “Any news?”

The calls are from Haitian cholera victims who are desperate to know if they’ll receive any of the compensation promised by the United Nations after its blue-helmeted peacekeepers infected Haiti’s Artibonite River and one of its tributaries with the deadly disease in 2010. 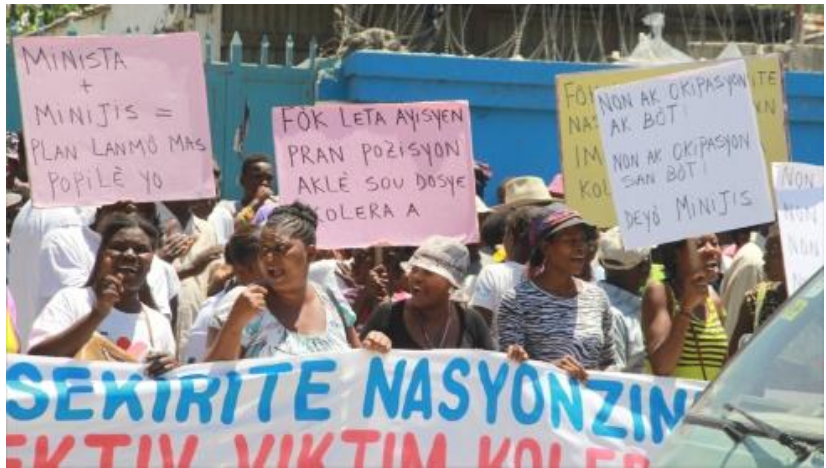