Where are Haitian Voices in the UN Remedial Process for Cholera?

The injustice perpetuated by the United Nations continues as little action has been done to reduce cholera, offer remedies to those affected, and incorporate victims into the remedial process. The UN has promised to help reduce cholera and provide collective reparations, such as health centers and schools. However, many Haitian victims prefer individual reparations, including small cash transfers that will allow them to rebuild their lives and reduce the debt incurred from travel to hospitals or funeral costs. Additionally, many are distrustful of the UN and any promises for community development, and they will likely remain wary of these promises until individual lives start to improve and cholera is no longer a threat. 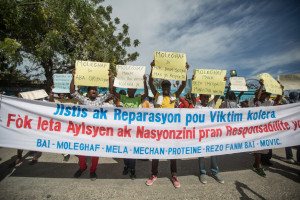 The United Nations is once again denying proper justice to victims of cholera in Haiti. Perhaps the UN hopes it can make good by apologising, which it did at the end of 2016, and accepting that it was at least partly involved in the initial outbreak of the disease. But this isn’t enough. And while it promises to prevent future outbreaks and offer remedies to victims, its efforts are proving inadequate.

The UN has to put its money where its mouth is – to listen to the individuals it harmed and to provide them with the remedies that they so desperately need.

Since 2004, the UN has maintained a peacekeeping mission (MINUSTAH) to help stabilise and rebuild the country. After a devastating earthquake in 2010, more peacekeepers arrived; the UN did not screen them for cholera, which had never been present in Haiti. Some peacekeeping camps had only inadequate toilet facilities, which were used by Nepalese peacekeepers carrying cholera; as a result, raw cholera-contaminated sewage found its way into Haiti’s main river, the Artibonite, upon which vast numbers of Haitians depend. The disease quickly spread around many parts of the country, and it’s thought to have killed around 10,000 people.